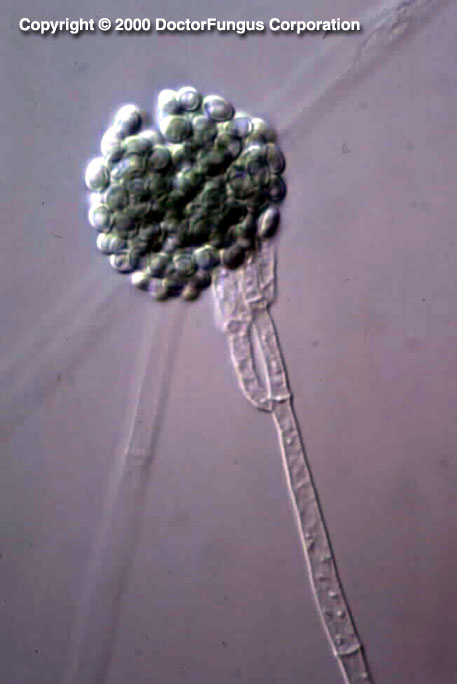 Gliocladium is a mitosporic filamentous fungus which is widely distributed in soil and decaying vegetation [1709, 2202]. It is commonly considered as a contaminant.The older (obselete) names for this genus are Acrostalagmus, Isaria, and Verticillium. The telemorphs of the genus Gliocladium are included in the genera Nectria, Hypocrea, and Nectriopsis [2202].

See the summary of telemorph-anamorph relations for the Gliocladium spp.

Gliocladium has not been reported as the causative agent of any disease in man or animals. Gliotoxin is a metabolite of Gliocladium deliquescens [1195]. The significance of detection of gliotoxin is yet to be determined.

Gliocladium spp. produce rapidly growing, spreading and cottony colonies. The growth covers the whole surface of the plate in about a week. From the front, the colonies are white to cream initially and may become pink to rose or dark green as they mature. The reverse is colorless, white, or yellowish [1295, 2202].

Gliocladium produces hyphae, conidiophores, phialides, and conidia. Hyphae are septate and hyaline. Conidiophores are erect and branch repeatedly at their apices. The terminal branches give rise to flask-shaped phialides. Conidia are one-celled, ovoid to cylindrical, accumulating in a single, terminal, large ball, or occasionally in a loose column. A penicillus bearing a single, large, slimy ball of one-celled conidia is typical of the genus Gliocladium.