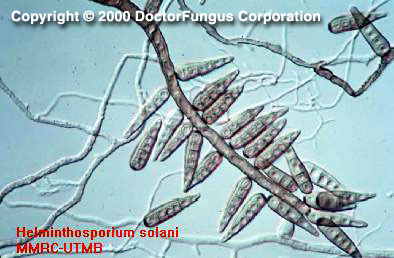 Helminthosporium is a dematiaceous filamentous fungus. This genus primarily contains moulds of grasses. Almost all of the species once classified to belong to this genus were later transferred to the genera Bipolaris or Exserohilum. Thus, to the current knowledge, genus Helminthosporium appears to have no clinical significance and is commonly considered as a contaminant isolated from soil and grass [531, 1295].

Helminthosporium spp. were once reported to be among causative agents of phaehyphomycosis. However, it has later been accepted that these isolates were once erroneously identified as Helminthosporium and were in fact strains belonging to the genera of Bipolaris and Exserohilum [9, 411, 1495, 1727]. Helminthosporium is rarely isolated in the laboratory and appears as a contaminant with no proven pathogenicity for humans or animals.

Helminthosporium colonies grow rapidly and mature in about 5 days. The texture is velvety to wooly. The color is olive green to black from the front and black from the reverse [1295].

Helminthosporium produces hyphae, conidiophores, and conidia. Hyphae are septate. Conidiophores are brown to dark brown, erect, parallel-walled, and ceasing to elongate when the terminal conidium is formed. Conidia are multicellular (six or more-celled), large (9-40 µm), solitary, club-shaped, and pale to dark brown in color. They are located along the sides of the conidiophores and their wider end is towards the conidiophore [1295].