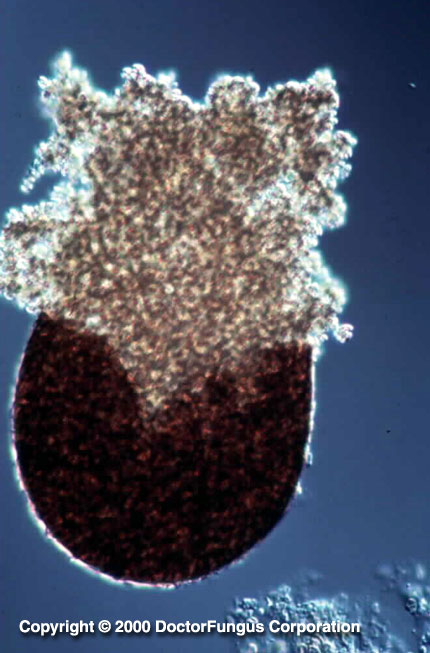 (described by Negroni and Fischer in 1943) Scedosporium apiospermum is one of the asexual forms of Pseudallescheria boydii

Pseudallescheria is a filamentous fungus that is found worldwide. It has so far been isolated from soil [2194], sewage, contaminated water, and the manure of farm animals. It is an emerging opportunistic pathogen and can cause various infections in humans. Pseudallescheria boydii is the telemorph of Scedosporium apiospermum and Graphium eumorphum. It is a homothallic fungus.

Colonies of Pseudallescheria boydii grow rapidly at 25°C. The texture is wooly to cottony. From the front, the color is initially white and later becomes dark gray or smoky brown. From the reverse, it is pale with brownish black zones [531, 1295, 2144, 2202].

Cleistothecia, asci, and ascospores are visualized in the sexual stage. Strains isolated from clinical samples rarely produce the sexual reproductive structures and an incubation of 2 to 3 weeks is required for formation of cleistothecia. Cleistothecium (50 to 250 µm in diameter) is a round, closed, brown, multicellular, sexual fruiting body. It bears asci and ascospores inside. The cleistothecium of Pseudallescheria boydii does not have appandages or ostioles. At maturation, the cleistothecium bursts and releases the asci that are filled with ascospores. Asci are subglobose to globose and bear 8 ascospores inside. Ascus walls readily dissolve to release the ascospores. Ascospores are unicellular, ovoid to ellipsoidal, smooth, and pale yellow brown to copper in color.

(Mats of) septate hyphae may be observed in the infected tissues [2061, 2148]. See also our histopathology page.

Pseudallescheria differs from Blastomyces dermatitidis and Sporothrix schenckii by not converting to a yeast phase at 37°C. It differs from Petriella by forming non-ostiolate cleistothecia.

MICs of amphotericin B, nystatin, liposomal nystatin, and terbinafine against clinical Scedosporium apiospermum isolates are often high [1511, 1973]. Promisingly, terbinafine was found to be synergistic with azoles [1990] against this fungus.

For MICs of various antifungal drugs for Pseudallescheria boydii, see our N/A(L):susceptibility database.