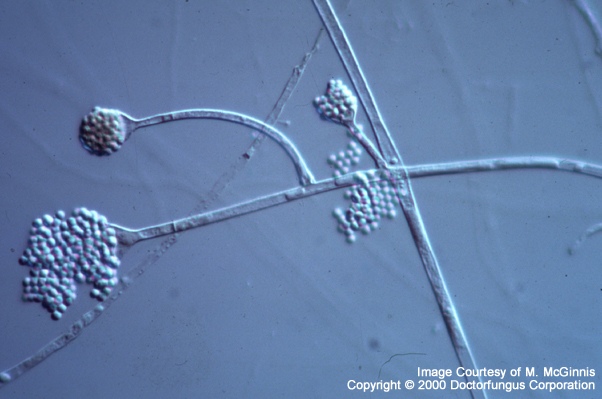 Absidia spp. are filamentous fungi that are cosmopolitan and ubiquitous in nature as common environmental contaminants. They are found in plant debris and soil, as well as being isolated from foods and indoor air environment. They often cause food spoilage.

Absidia corymbifera is a relatively rare cause of human zygomycosis. Zygomycosis is an opportunistic mycoses that manifests with pulmonary, rhinocerebral, cutaneous, gastrointestinal, renal or meningeal involvement. Disseminated zygomycosis may originate from these infections. Zygomycosis is very rarely observed in immunocompetent host [963, 1918].

Absidia corymbifera is more commonly reported as an animal pathogen. It may cause mycotic abortion in the cow [1219].

Since Absidia spp. are cosmopolitan and ubiquitous in nature, they are also common laboratory contaminants. Thus, their isolation in culture requires cautious evaluation. Nevertheless, the growth of Absidia, particularly from clinical samples of patients with immunosuppression or diabetes mellitus, should be regarded as potentially significant. Also, the visualization of typical hyphae of zygomycetes group of fungi on direct microscopic examination, of particularly a sterile body site, should be considered significant even if the culture yields no growth.

Absidia corymbifera grows rapidly. The rapid growing, flat, woolly to cottony, and olive gray colonies mature within 4 days. The diameter of the colony is 3-9 cm following incubation at 25°C for 7 days on potato glucose agar. The texture of the colony is typically woolly to cottony. From the surface, the colony is grey in color. The reverse side is uncolored and there is no pigment production. Absidia corymbifera is a psychrotolerant-thermophilic fungus. It grows more rapidly at 37°C than at 25°C. Its maximum growth temperature is as high as 48 to 52°C. The growth of Absidia corymbifera is optimum at 35-37°C and at a pH value of 3.0 to 8.0 [462, 1295, 2144].

The other members of Zygomycetes; Apophysomyces, Mucor, Rhizomucor, and Rhizopus.

Key Features for Differentiation from Other Members of Zygomycetes

*has a dark pigmented band below the sporangium

In vitro susceptibility data reported so far are limited [1040, 1130]. MIC breakpoints for interpretation of in vitro susceptibility results have not been defined. Similar to the other members of the class Zygomycetes, amphotericin b appears as the sole antifungal drug which is consistently active against Absidia corymbifera . In general, it is resistant to azoles, including the newer derivatives such as voriconazole [2432]. flucytosine is also ineffective against Absidia corymbifera . Some strains may yield relatively low MICs of sordarin group of compounds. However, the significance of this finding is unclear [2212].

In vivo response, on the other hand, largely depends on administration of full-dose amphotericin B therapy as well as extensive surgical debridement and correction of the underlying predisposing factors (such as immunosuppression and diabetic acidosis) [1918].

For MICs of various antifungal drugs so far reported for Absidia, see our N/A(L):susceptibility database.