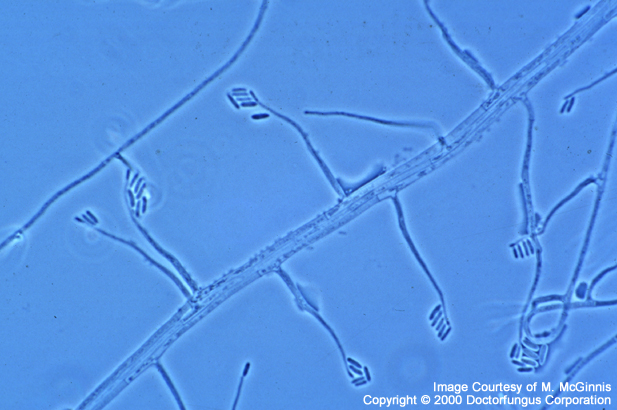 Acremonium spp. are filamentous, cosmopolitan fungi commonly isolated from plant debris and soil. The sexual state of Acremonium is not well-defined. Thus, it is classified among the deuteromycetes group of fungi by some authorities. Others prefer to include it in Ascomycota phylum, due to its structural properties similar to those of this group.

There are three main species of Acremonium implicated in infections: Acremonium falciforme, Acremonium kiliense, and Acremonium recifei. See the list of obsolete names and synonyms for older names of these species.

Acremonium is one of the causative agents of eumycotic white grain mycetoma. Rare cases of onychomycosis, keratitis, endophthalmitis, endocarditis, meningitis, peritonitis, and osteomyelitis due to Acremonium have also been reported [730, 952]. This fungus is known to cause opportunistic infections in immunocompromised patients, such as bone marrow transplant recipients [1581]. Infections of artificial implants due to Acremonium spp. are occasionally observed [1750].

Since Acremonium species are cosmopolitan in nature, they are also encountered as contaminants. Thus, their isolation in culture requires cautious evaluation.

The growth rate of Acremonium colonies is moderately rapid, maturing within 5 days. The diameter of the colony is 1-3 cm following incubation at 25°C for 7 days on potato glucose agar. The texture of the colony is compact, flat or folded, and occasionally raised in the center. It is glabrous, velvety, and membrane-like at the beginning. Powdery texture may also be observed. By aging, the surface of the colony may become cottony due to the overgrowth of loose hyphae. The color of the colony is white, pale grey or pale pink on the surface. The reverse side is either uncolored or a pink to rose colored pigment production is observed [462, 1295, 2144].

Acremonium spp. possess hyaline, septate hyphae which are typically very fine and narrow. Vegetative hyphae often form hyphal ropes. Unbranched, solitary, erect phialides are formed directly on the hyphal tips, the hyphal ropes, or both. The phialides are separated from hyphae by a septum and taper towards their apices. At the apices of the phialides are the hyaline conidia 2-3×4-8µm in size. They usually appear in clusters, in balls or rarely as fragile chains. The conidia are bound by a gelatinous material. They may be single or multicellular, fusiform with a slight curve or resemble a shallow crescent. These structural properties of conidia vary depending on the species. Acremonium falciforme usually produces crescentic, nonseptate conidia. Sometimes, 2- or 3-celled conidia may also be observed. Acremonium kiliense, on the other hand, has short straight conidia and the conidia of Acremonium recifei are usually crescentic and nonseptate [462, 1295, 2144].

The grains (500-2000µm in size) of Acremonium spp. are regular and oval to round in shape. When stained with H&E, poorly staining dense hyphal packs are observed [462].

In vitro susceptibility data reported so far are limited. MIC breakpoints for interpretation of in vitro susceptibility results have not been defined. Recent work has focused on determination of the efficacy of novel antifungal agents against Acremonium. The novel azoles, such as voriconazole, and posaconazole appear to exhibit favorable in vitro activity against Acremonium strains. Itraconazole MICs obtained for Acremonium isolates, on the other hand, are somewhat higher than those of voriconazole. Among the glucan synthesis inhibitors, the MICs of caspofungin are lower than those of V-echinocandin [683, 914, 1434, 1494].

In vivo response, on the other hand, depends on both antifungal therapy and surgical intervention. Among the available antifungal agents, amphotericin B remains as the mainstay of therapy. Acremonium spp. may also respond to azoles, which are occasionally used in combination with amphotericin B. The limited data obtained so far for voriconazole appear promising [730].

For MICs of various antifungal drugs so far reported for Acremonium, see our N/A(L):susceptibility database.