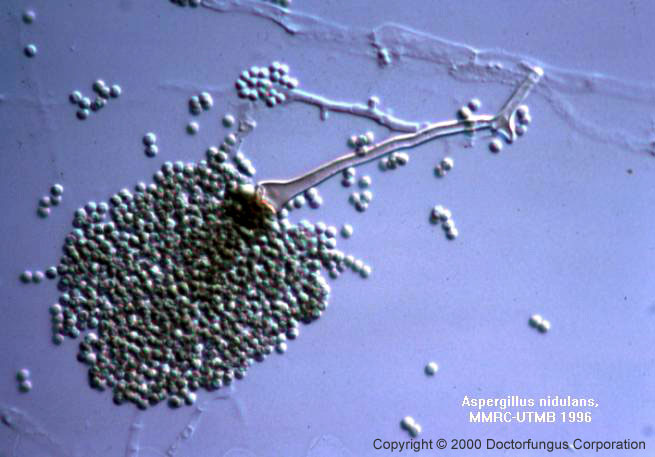 Aspergillus is a filamentous, cosmopolitan and ubiquitous fungus found in nature. It is commonly isolated from soil, plant debris, and indoor air environment. While a teleomorphic state has been described only for some of the Aspergillus spp., others are accepted to be mitosporic, without any known sexual spore production.

Aspergillus spp. are well-known to play a role in three different clinical settings in man: (i) opportunistic infections; (ii) allergic states; and (iii) toxicoses. Immunosuppression is the major factor predisposing to development of opportunistic infections [1048]. These infections may present in a wide spectrum, varying from local involvement to dissemination and as a whole called aspergillosis. Among all filamentous fungi, Aspergillus is in general the most commonly isolated one in invasive infections. It is the second most commonly recovered fungus in opportunistic mycoses following Candida.

Almost any organ or system in the human body may be involved. Onychomycosis, sinusitis, cerebral aspergillosis, meningitis, endocarditis, myocarditis, pulmonary aspergillosis, osteomyelitis, otomycosis, endophthalmitis, cutaneous aspergillosis, hepatosplenic aspergillosis, as well as Aspergillus fungemia, and disseminated aspergillosis may develop [124, 567, 638, 748, 800, 811, 817, 839, 874, 938, 952, 1161, 1536, 1975]. Nosocomial occurrence of aspergillosis due to catheters and other devices is also likely [1386]. Construction in hospital environments constitutes a major risk for development of aspergillosis particularly in neutropenic patients [1363].

Some Aspergillus antigens are fungal allergens and may initiate allergic bronchopulmonary aspergillosis particularly in atopic host [829, 1271]. Some Aspergillus spp. produce various mycotoxins. These mycotoxins, by chronic ingestion, have proven to possess carcinogenic potential particularly in animals. Among these mycotoxins, aflatoxin is well-known and may induce hepatocellular carcinoma. It is mostly produced by Aspergillus flavus and contaminates foodstuff, such as peanuts [1576].

Aspergillus spp. can cause infections in animals as well as in man. In birds, respiratory infections may develop due to Aspergillus. It may induce mycotic abortion in the cattle and the sheep [2144]. Ingestion of high amounts of aflatoxin may induce lethal effects in poultry animals fed with grain contaminated with the toxin.

Since Aspergillus spp. are found in nature, they are also common laboratory contaminants.

The major macroscopic features remarkable in species identification are the growth rate, color of the colony, and thermotolerance [462, 1295, 2144].

Aspergillus colonies are downy to powdery in texture. The surface color may vary depending on the species. The reverse is uncolored to pale yellow in most of the isolates. However, reverse color may be purple to olive in some strains of Aspergillus nidulans and orange to purple in Aspergillus versicolor (TABLE 1).

TABLE 1. The color of the colony in various Aspergillus species

The basic microscopic morphology is same for all species. However, some other microscopic structures are unique to certain species and constitute the key features for species identification together with the surface color of the colony (TABLE 2)[462, 1295, 2144].

1. COMMON TO ALL SPECIES: Hyphae are septate and hyaline. The conidiophores originate from the basal foot cell located on the supporting hyphae and terminate in a vesicle at the apex. Vesicle is the typical formation for the genus Aspergillus. The morphology and color of the conidiophore vary from one species to another. Covering the surface of the vesicle entirely (“radiate” head) or partially only at the upper surface (“columnar” head) are the flask-shaped phialides which are either uniseriate and attached to the vesicle directly or are biseriate and attached to the vesicle via a supporting cell, metula. Over the phialides are the round conidia (2-5 µm in diameter) forming radial chains.

Following the documentation of the NCCLS proposed standard (M38-P) for in vitro susceptibility testing of filamentous fungi [1622], more data have been available on in vitro activity of Aspergillus spp. Although the MIC breakpoints for the available antifungal agents are not defined yet, the results of these studies are in consensus for a number of features. The MICs obtained for different species of Aspergillus are in general similar. While most of the Aspergillus isolates yield acceptably low MICs for amphotericin B, itraconazole, and voriconazole, high MICs potentially predictive of resistance have been reported for a number of isolates [119, 1130, 1669]. Among these are, amphotericin B MICs for Aspergillus terreus [2203]. A few itraconazole-resistant Aspergillus fumigatus isolates have also been identified [578]. Significantly and finally, voriconazole appears effective in vitro against itraconazole-resistant Aspergillus fumigatus [119].

Correlation of the in vitro susceptibility test results with the clinical outcome has been documented for itraconazole and Aspergillus [573]. Treatment of invasive aspergillosis is still troublesome with high rate of mortality. While amphotericin B (including its lipid formulations) and itraconazole are the currently available therapeutic options, the clinical success rate is still unsatisfactory due both to the low efficacy and/or high toxicity of the drugs and existence of unfavorable immune status of the host, such as lack of recovery from neutropenic state [568, 569, 572, 608, 659, 740, 830, 910, 958]. The concommitant use of colony stimulating factors may activate the macrophages, enhance their fungicidal activity and prevent dissemination of the infection [780].

For MICs of various antifungal drugs for Aspergillus, see our N/A(L):susceptibility database.