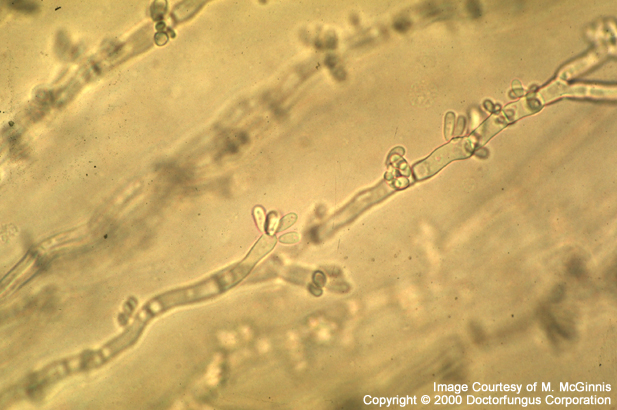 It grows moderately rapidly and matures within 7 days of incubation. The colony diameter is 1 to 3 cm following incubation at 25°C for 7 days on potato glucose agar. The colonies are flat, smooth, moist, yeast-like, mucoid to pasty, shiny and leathery in appearance. The surface is white, pale pink or yellow at the beginning and becomes brown to black and velvety with a grayish fringe by aging. Reverse is pale or black.

When the colony is young, moist, and yeast-like, unicellular budding yeast cells (blastoconidia) are the only structures observed microscopically. By aging, while the colony gets black and velvety, hyphae become visible.

Blastoconidia are pale in color. The synchronous development of blastoconidia in tufts is typical. Hyphae are septate. They appear hyaline at the beginning and get dark brown by aging. The width of the hyphae is generally 2-10 µm but may be as thick as 15-20 µm. Aureobasidium has no distinct conidiophores. Conidiogenous cells, which are not much differentiated, are either intercalary or located terminally in the hyphae. The conidia (4-6 x 2-3 µm in size) are one-celled, hyaline and oval to cylindrical in shape. They form clusters or are located along the hyphae. These conidia continue to multiply by budding and form secondary blastoconidia.

As for other agents of phaehyphomycosis, dark-walled, short, septate hyphae may be observed in H&E stained sections. If the pigment production is not prominent, the use of Fontana-Masson silver stain may be advantageous [462].

* produces blastoconidia successively, in a chain-like fashion and from a single opening