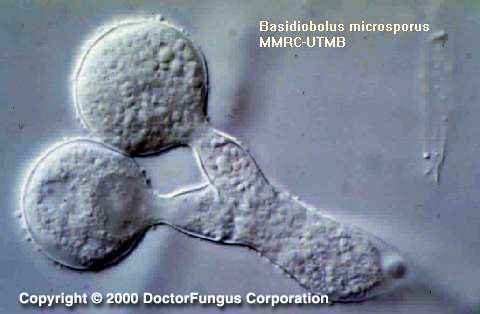 Basidiobolus is a filamentous fungus isolated from dung of amphibians, reptiles, and insectivorous bats, as well as wood lice, plant debris and soil. Although it is cosmopolitan, the human infections due to Basidiobolus are reported mostly from Africa, South America, and tropical Asia.

Basidiobolus ranarum is the etiologic agent of subcutaneous chronic zygomycosis in man.
This infection is also called entomophthoromycosis basidiobolae. It is characterized by its granulomatous nature and formation of hard, nonulcerating subcutaneous masses at limbs, chest, back, and buttocks. Systemic infection is rare. Basidiobolus is a true pathogen, causing infections in immunocompetent host. However, recent data on angioinvasive infections due to Basidiobolus in immunocompromised patients suggest that it is emerging as an opportunistic pathogen as well [1918]. It may rarely cause acute zygomycosis, which is similar to that defined for the zygomycetous fungi in the Mucorales order. Gastrointestinal infections due to Basidiobolus ranarum have also been reported in man [2490].

Basidiobolus can cause infections in animals as well as humans. Cutaneous lesions in amphibians, subcutaneous infection in horses and gastrointestinal lesions in dogs have so far been reported.

It grows moderately rapidly, the diameter of the colony reaching 1 to 3 cm following incubation at 25°C for 7 days on potato glucose agar. Its growth is more rapid at 30°C compared to 37°C. The colony is flat, thin, waxy and buff to gray in color initially. It later becomes heaped up or radially folded, grayish brown in color and is covered by fine, white, powdery surface mycelium. The reverse is white or pale. The germinated conidia ejected from the primary colony may form satellite colonies. Some Basidiobolus strains have an earthy odor typical for Streptomyces spp. [462, 1295, 2144].

Sporulation is observed only in freshly isolated strains and ceases as the colony gets older or is subcultured. Thus, the strain should be examined microscopically as soon as it is isolated. Special medium containing glucosamine hydrochloride and casein hydrolysate may be used to stimulate sporulation.

The hyphae are large (8 to 20 µm in diameter) and septate. The number of septa increases and becomes plenty as the spores are produced. The sexual spores, zygospores of Basidiobolus, are thick-walled and smooth or have undulating outer cell walls. Each zygospore typically possesses two lateral appendages which are the conjugation beaks. These appendages are the remnants of a copulatory tube.

In tissue sections infected with Basidiobolus ranarum, broad, thin-walled hyphae which are aseptate or infrequently septate are observed. The contours of the hyphae are nonparallel and branches are random.

In general, in contrast to those in Mucorales order, fungi included in Entomophthorales order do not invade vascular tissue. Thus, no infarction is observed in infected tissue. However, Basidiobolus ranarum infections may be angioinvasive in immunocompromised hosts [1918]. There is a chronic inflammatory response with a predominance of eosinophiles [462].

The macroscopic morphology is similar to that of Phytium spp.

Limited data obtained so far suggest that, while flucytosine MICs are very high, those of fluconazole, itraconazole, ketoconazole, and miconazole are considerably low for Basidiobolus strains [912].

Infections due to Basidiobolus are difficult to treat. Systemic potassium iodide solution and trimethoprim-sulfamethoxazole are usually preferred. Oral ketoconazole and fluconazole may be of help in some cases [1895]. However, amphotericin B has practically no significant efficacy and surgery is not curative .