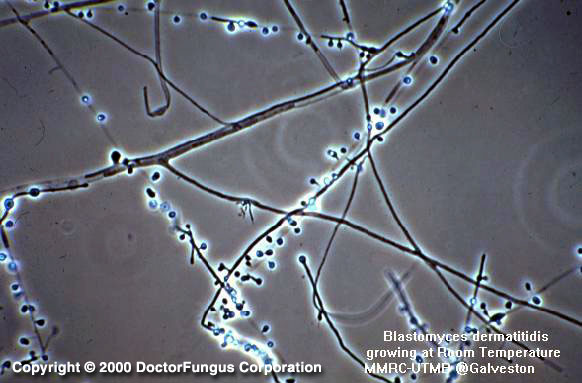 Blastomyces dermatitidis is the only species included in the genus Blastomyces.

It is the causative agent of blastomycosis which is one of the true systemic (endemic) mycoses. Cutaneous and systemic (disseminated) blastomycosis are the two clinical forms of the disease. Blastomycosis in general is acquired by inhalation and initially presents with a pulmonary infection which may later disseminate to other organs and systems. Primary cutaneous infection due to direct inoculation of the fungus into the skin is also likely. Hematogenous spread of the organism results in infection of skin, bones, kidneys and male urogenital system. Blastomycosis of the central nervous system (CNS), eyes, larynx, paranasal sinuses, tongue, adrenal glands, uterus, ovaries, gastrointestinal tract, liver and spleen have so far been reported. Otitis media, resulting in cranial osteomyelitis may also develop. Reactivation blastomycosis and subclinical, self-limited infections have been defined [718, 1106, 1590].

Blastomyces dermatitidis can also infect dogs. Canine blastomycosis has a similar pathogenesis to human blastomycosis. Dogs are infected by inhaling the infectious particles and they are good indicators of the existence of Blastomyces dermatitidis in the nearby environment. However, there seems to be no correlation between the existence of dogs with blastomycosis and emergence of human cases in a defined environmental area. Also, there is no evidence of animal-to-human transmission of the disease [462].

Being a thermally dimorphic fungus, Blastomyces dermatitidis behaves diversely at different temperatures. The morphology of the fungus is mould-like at 25°C and yeast-like at 37°C. Although the demonstration of conversion from the mycelial form to yeast form is favorable for definitive identification of Blastomyces dermatitidis, it remains possible only for few isolates pathogenic to humans. Other ways of verification of the identification are by use of exoantigen test, direct flourescent antibody and nucleic acid probes. Below are the macroscopic features of the fungus [462, 1295, 2144]:

1. At 25°C
The growth rate is slow to moderately rapid. The colony diameter is 0.5 to 3 cm following incubation for 7 days on potato glucose agar. The texture is membranous and downy to woolly. The surface color is white to beige and reverse is pale to brownish.

2. At 37°C
Conversion to a yeast form at 37°C usually requires inoculation onto an enriched medium. The growth rate is slow to moderately rapid. The colony diameter is 0.5 to 3 cm following incubation for 7 days. The texture is typically creamy and yeast-like. It appears granular to verrucose on the surface. The color of the colony is white to beige.

The classical way to isolate Blastomyces dermatitidis from environmental sources is by animal inoculation techniques. More recently, an in vitro method has also been described and used for isolation of the fungus from a woodpile in north central Wisconsin. In this in vitro method, the environmental material or soil to be tested is placed in a neutral aqueous solution containing allantoin, tween 80, potassium phosphate, magnesium sulphate, penicillin and streptomycin and is incubated at 37°C for 22 days. Following this step, a small amount of the solution (100 µl) is plated onto yeast-extract phosphate agar and incubated at 20°. After the isolation of Blastomyces dermatitidis mould colonies on yeast-extract phosphate agar, the colonies are plated onto brain-heart infusion agar to demonstrate the conversion to yeast phase [202].

Similar to the macroscopic morphology, microscopic appearance of the fungus also depends on the temperature of isolation [462, 1295, 2144]:

1.At 25°C
Septate hyaline hyphae and unbranched short conidiophores are observed. Conidiophores arise at right angles to the vegetative hyphae. The conidia are hyaline and unicellular. They are solitary and pyriform to globose in shape.

2. At 37°C
After incubation at 37°C on an enriched medium or in infected tissue sections, the fungus appears as budding yeast cells. The yeast cells (8-12 µm in diameter) typically have double-contoured refractile walls and a broad base attaching the bud to the parent cell. These blastoconidia are globose in appearance.

Although the yeast cells are the major fungal structures found in the infected tissues, mycelial forms of Blastomyces dermatitidis are also observed occasionally. H&E staining method is favorable to evaluate the host tissue reaction. However, Blastomyces dermatitidis may be difficult to visualize in sections stained with H&E. Gomori’s methenamine silver stain (GMS) and periodic acid-Schiff (PAS) can readily visualize the fungus. Application of both GMS and H&E stain enables the detection of both host tissue reaction and the fungal cells effectively. GMS stains the cell wall deep black and interior of the yeast cell rose-colored, with a light green background. PAS stains the fungus red and the background pink or light green, depending on the counterstain used. The yeast cells may be small (2-10 µm in diameter) or large (25-40 µm in diameter). When present, hyphae are short, hyaline, and septate [299, 462].

Some Paracoccidioides brasiliensis isolates may give false positive results with the DNA probes used for identification of Blastomyces dermatitidis.

Blastomyces dermatitidis is potentially dangerous and requires biological safety cabinet for all manipulations.

In vitro susceptibility testing procedures have not been yet standardized for Blastomyces dermatitidis as well as other thermally dimorphic fungi, except for mycelial phase of Sporothrix schenckii. However, there are reports on in vitro activity of some antifungal agents against Blastomyces. In general, amphotericin B, ketoconazole and itraconazole are highly active. In contrast, fluconazole MICs against Blastomyces are unacceptably high. The novel agents, voriconazole, posaconazole, VER-002, and caspofungin appear active against Blastomyces [422, 603, 683, 1338, 2492].

Amphotericin B, ketoconazole, and itraconazole are effective in treatment of blastomycosis. Amphotericin B should be preferred particularly in immunocompromised patients. On the other hand, mild pulmonary blastomycosis may clear spontaneously and not require antifungal therapy. Surgical excision of pulmonary lesions may be indicated in some cases in addition to antifungal therapy [1371, 1716].

For MICs of various antifungal drugs for Blastomyces dermatitidis, see our N/A(L):susceptibility database.