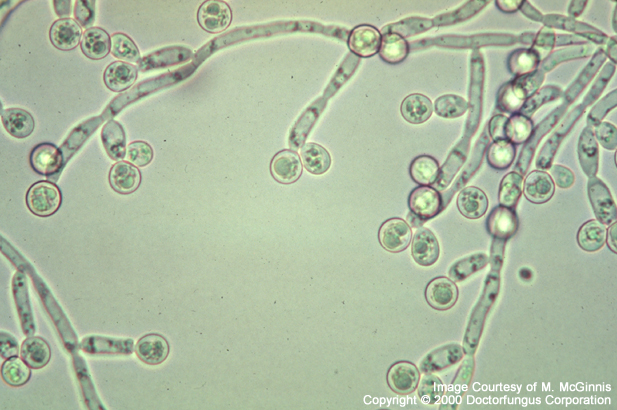 Colonies on Sabouraud dextrose agar at 25°C are white to cream, soft, and smooth to wrinkled. This isolate grows at 42°C and on media containing cycloheximide.

On cornmeal following 72 hours incubation at 25°C, abundant branched pseudohyphae and true hyphae with blastoconidia are present. The blastoconidia are formed in grape-like clusters along the length of the hyphae. Terminal chlamydoconidia may be formed with extended incubation [2202].

This species is the most commonly-isolated yeast in human disease. It has been implicated in both superficial and systemic disease. Recent reports of infections include corneal [1932], nail [1292], ear [1448], endocarditis [1328], and bloodstream [2337]. Risk factors for infections with C. albicans include age of 65 years or above, immunosuppression prior to steroid use, leukocytosis, intensive care unit stays, or presence of intravascular or urinary catheters. For those patients who have undergone cancer chemotherapy and who often appear less critically ill, infections are most likely to be caused by Candida species other than C. albicans [430]. Although this species continues to be the most common species isolated in bloodstream infections, reports show that the incidence is decreasing and the resistance is rare in neonatal populations [773]. Candida albicans is also a predominate species in fungal biofilms on medical devises [1013], [16].