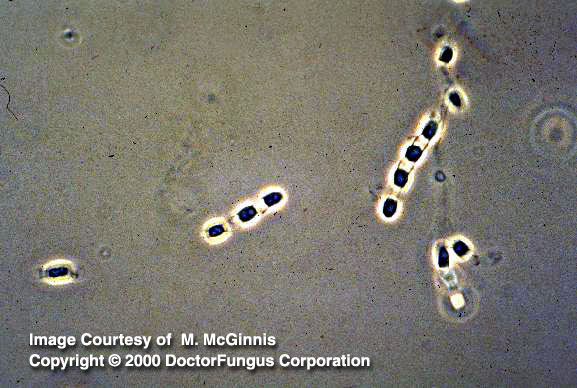 (described by Rixford and Gilchrist in 1896)

Coccidioides immitis and C. posadasii are thermally dimorphic fungi found in soil particularly at warm and dry areas with low rain fall, high summer temperatures, and low altitude. The two species are morphologically identical but genetically and epidemiologically distinct [738, 739]. C. immitis is geographically limited to California’s San Joaquin valley region and Washington state, whereas C. posadasii is found in the desert southwest of the United States, Mexico, and South America. The two species appear to co-exist in the desert southwest and Mexico.

Although it was recognized for some years that C. immitis contained two genetic subgroups, their description as separate species did not occur until 2002 [739]. Prior to this, the two groups were simply known as the California and non-California variants of C. immitis. Thus, essentially all prior literature treats them as a single species. As the two species can be distinguished only by genetic analysis and different rates of growth in the presence of high salt concentrations (C. posadasii grows more slowly), little is known as yet about differences in pathogenicity. Thus, the remainder of this discussion will simply refer to the pair of species as C. immitis/posadasii.

C. immitis/posadasii specifically inhabits alkaline soil. It is isolated in rodent burrows at desert-like areas of southwest United States. It has no known teleomorph [531, 1295, 2202].

Coccidioides immitis/posadasii is a pathogenic fungus and is among the causative agents of true systemic (endemic) mycoses. It is endemic at southwest United States, Northern Mexico, and certain areas in Central and South America. Imported cases may be observed following travel to endemic areas [86, 360].

Coccidioides immitis/posadasii is the causative agent of coccidioidomycosis in humans. Coccidioidomycosis is one of the true systemic (endemic) mycoses [794]. It is acquired by inhalation and initially presents with a pulmonary infection which may later disseminate to other organs and systems. Airway coccidioidomycosis involving the endotracheal and endobronchial tissues may develop [1821]. Inhalation of the dry arthroconidia of Coccidioides immitis/posadasii, which are carried by dust storms, initiates the infection. Afterwards, hematogenous spread of the organism results in infection of skin, bones, joints, lymph nodes, adrenal glands, and central nervous system [60, 208, 255]. The clinical picture has a remarkably wide spectrum. The infection remains as an acute and self-limited respiratory infection in most exposed hosts, but it progresses to a chronic and sometimes fatal disease in others. Spontaneous healing is observed in as high as 95{64e6c1a1710838655cc965f0e1ea13052e867597ac43370498029d1bc5831201} of the otherwise healthy hosts. Dissemination may occur particularly during pregnany and carries a high risk of mortality [1837].

Although coccidioidomycosis basically effects otherwise healthy immunocompetent hosts due to the true pathogenic nature of the fungus, it may also develop in immunocompromised patients, such as patients with AIDS and organ transplant recipients [255, 1504]. Activities and professions related to tillage of the soil, such as agricultural work, telephone post digging, archeology, or simply playing with soil appear to be associated with development of coccidioidomycosis [531].

Coccidioidomycosis has also been described in warm-blooded water animals such as bottlenose dolphins [1888] and horses [2497].

Coccidioides immitis/posadasii colonies grow rapidly. The macroscopic morphology may be very variable. At 25 or 37°C and on Sabouraud dextrose agar, the colonies are moist, glabrous, membranous, and grayish initially, later producing white and cottony aerial mycelium. With age, colonies become tan to brown in color.

Coccidioides immitis/posadasii continues to grow as a mould and does not produce spherules at any temperature unless special growth medium is provided in vitro. This finding indicates that temperature is not the only variable that controls the spherule formation. Thus, some authorities prefer not to classify this fungus as thermally dimorphic. Nevertheless, Coccidioides immitis/posadasii is commonly classified among the thermally dimorphic fungi.

The definitive identification of an isolated Coccidioides immitis/posadasii strain requires demonstration of spherule production in vitro, use of DNA probes, application of exoantigen tests, or demonstration of spherule production in vivo by animal experiments [1295, 1350]. Molecular typing studies have also been initiated and appear useful in identification [1484].

Spherules containing endospores are the typical structures formed in infected tissues [1173]. The transition form of C. immitis/posadasii producing septate hyphae that develop into arthroconidia may be observed in necrotic nodules and misdiagnosed as one of the fungi in hyphomycetes group, particularly if the spherules are not yet evident [462, 1174]. Hyphal forms may also be observed in brain tissue or cerebrospinal fluid in the presence of plastic devices. These devices presumably trigger the morphological reversion to the saprophytic form [964].

Immature nonendosporulationg cells are produced by Coccidioides immitis/posadasii at early growth phases. These cells may resemble nonbudding forms of Blastomyces dermatitidis and may cause diffulty in differentiation of the two fungi [1174, 1295].

The arthroconidia of Coccidioides immitis/posadasii are highly infectious. All manipulations should be done in a biological safety cabinet.  An excellent expert opinion piece regarding how to handle laboratory exposure has been published here.

For MICs of various antifungal drugs for Coccidioides immitis/posadasii, see our N/A(L):susceptibility database.

Patients with self-limited disease or relatively localized acute pulmonary infections usually do not require antifungal therapy. Antifungal therapy should be given to patients who have disseminated disease or are under risk of complications due to their underlying immunosuppression and other factors. Amphotericin B [624] and azoles, such as fluconazole, itraconazole, and ketoconazole are used for treatment of coccidioidomycosis [255, 795, 1504]. However, clinical failure during antifungal therapy is not uncommon [624]. Azoles, particularly fluconazole, is preferred for treatment of cases with meningitis. Available data suggest that the azole therapy should be continued life long in cases with meningitis to prevent relapses [583]. Amphotericin B, if used for treatment of meningitis, should be given via intrathecal route and for a prolonged duration [624].

Concomitant surgical interventions may be required for some patients with pulmonary coccidioidomycosis [468] as well as cases with bone and joint involvement [624].