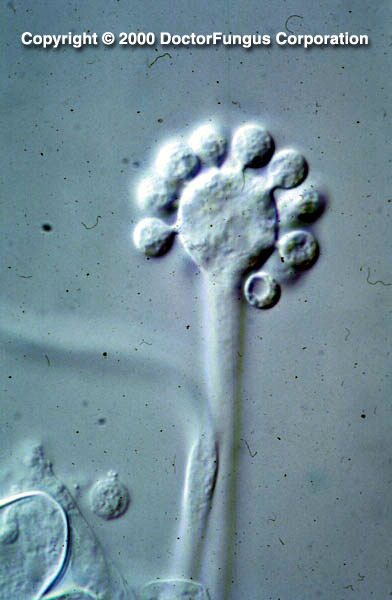 Cunninghamella is a filamentous fungus found in soil and plant material, particularly at Mediterranean and subtropical zones. It has also been recovered from animal material, cheese, and Brazil nuts. In addition to being a common contaminant, Cunninghamella is an opportunistic fungus that may cause infections in immunocompromised hosts [531, 1295, 2144, 2202].

Cunninghamella spp. are among the causative agents of zygomycosis. Although the term mucormycosis has often been used for this syndrome, zygomycosis is now the preferred term for this angio-invasive disease. Trauma, diabetes mellitus, immunosuppression due to various reasons (hematological malignancies, organ transplantation, AIDS), and desferoxamine therapy are the major risk factors for development of zygomycosis. Among the other genera belonging to the class zygomycetes, Cunninghamella is particularly sensitive to desferoxamine therapy. Lastly and importantly, Cunninghamella infections have been reported in a number of cases receiving antifungal prophylaxis with itraconazole [1925].

Cunninghamella bertholletiae may cause rhinocerebral, pulmonary, cutaneoarticular, and disseminated forms of zygomycosis. The infection usually starts after inhalation of the spores or inoculation of the fungus following the primary breakdown of the skin integrity due to a trauma [62, 277, 516, 1474, 1589, 1906, 1918, 1925, 2042].

Nonseptate or sparsely septate broad hyphae, sporangiophores, terminal vesicles, sporangioles (sporangiola; sing. sporangiolum), and sporangiospores are visualized. Sporangiophores are erect and form short lateral branches each of which terminates in a swollen vesicle. The vesicle (30-65 µm in diameter) has spine-like denticles on its surface. Sporangioles (5-8 x 6-14 µm) are round to oval in shape, one-spored, and are formed on these denticles. Sporangiospores are one-celled, solitary, and globose to ovoid in shape. The walls of the spores often have needle-like crystals. Zygospores have tuberculate projections and may form only after appropriate mating studies [531, 1295, 2144, 2202].

Unlike Cunninghamella, the terminal vesicle on the sporangiophore of Syncephalastrum bears finger-shaped sporangia on its surface. Each of these sporangia is called merosporangium. Each merosporangium carries linearly arranged sporangiospores inside.

Very few data are available and there is as yet no standard method for in vitro susceptibility testing of Cunninghamella spp. In an in vitro study where two Cunninghamella echinulata strains were tested, the rank of MICs was found to be voriconazole, ketoconazole, amphotericin B, itraconazole [2432].

On the other hand, amphotericin B, ketoconazole, and itraconazole generated considerably high MICs for some isolates of Cunninghamella spp. in other workers’ hands [1973].

For MICs of various antifungal drugs for Cunninghamella, see our N/A(L):susceptibility database.

Liposomal amphotericin B has been used for treatment of Cunninghamella infections. However, prognosis is often poor [1925].