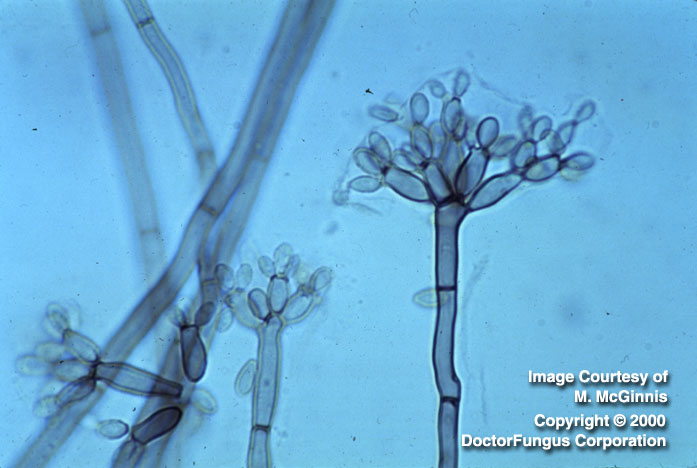 Fonsecaea is a pigmented (dematiaceous), filamentous fungus found in rotten wood and soil. It has no known teleomorphic phase. As well as being a saprophyte in nature, it causes infections in humans. Cold-blooded animals living in swamps may also be infected. Fonsecaea exhibits in vivo dimorphism; it produces a specific structure (sclerotic body) only in tissue and grows in mould form in laboratory conditions [462, 531, 1295, 2144, 2202].

See the summary of synonyms for Fonsecaea spp.

Fonsecaea is one of the causative agents of the post-traumatic, chronic infection of subcutaneous tissues known as chromoblastomycosis. Chromoblastomycosis presents with papules and verrucose cauliflower-like lesions most commonly on lower extremities [286, 462]. Primary nasal chromoblastomycosis has also been reported [2488]. The etiologic agents of chromoblastomycosis are generally members of three genera of dematiaceous fungi that inhabit the soil: Fonsecaea, Phialophora, and Cladosporium [533].

In addition to chromoblastomycosis, Fonsecaea may cause other human infections as well. Paranasal sinusitis [1506], keratitis [737], and fatal brain abscesses following hematogenous dissemination [784] have been reported.

Fonsecaea grows slowly and produces restricted, flat to raised and folded, velvety to cottony colonies on potato dextrose agar at 25°C. The colonies mature in 14 days. From both front and reverse, they are olivaceous to brown-black in color. The filamentous appearance is maintained upon cultivation at 25, 30, or 37°C [531, 1295, 2202].

Fonsecaea produces septate, dark brown hyphae and suberect conidiophores that highly branch at apices. The conidiophores are pale brown, erect, septate, and sympodial with conidiogenous zones confined to the upper portion. The conidia (1.5-3 x 2.5-6 µm) are brown and barrel-shaped. Four types of conidiogenesis are observed [1295]:

All fungi causing chromoblastomycosis produce a distinctive structure in infected tissues that is called a sclerotic body (sometimes one also sees the phrases muriform cell and Medlar body). Phaeoid (dark-colored) hyphae may also be observed in infected tissues. Sclerotic bodies are dark brown, spherical or polyhedral, thick-walled structures which have horizontal and vertical septa inside. They may be found singly, in clusters, or within the giant cells. Melanin, which is produced in the cell wall of the sclerotic body, gives the dark brown color to the structure. Unlike yeasts, sclerotic bodies mostly divide by separation along the septa. Budding may also occur but is not believed to be a significant means for reproduction. The production of sclerotic bodies only in tissue is believed to be regulated by the concentration of calcium ions within the infected tissue [462, 2482].

The presence of sclerotic bodies in the tissue confirms the diagnosis of chromoblastomycosis. The determination of the infecting fungus requires cultivation.

Fonsecaea is recognized by its complex conidial head consisting of apically, irregularly swollen series of conidia that function as conidiogenous cells. This predominant type of conidial development distinguishes Fonsecaea from Cladosporium and Rhinocladiella, as described in the section on microscopic appearance. Fonsecaea is differentiated from Cladophialophora by producing short conidial chains which consist of 5 or less conidia.

Fonsecaea should be handled with care in a biological safety cabinet.

Few data are available and there is as yet no standard method for in vitro susceptibility testing of Fonsecaea spp. Amphotericin B, ketoconazole, miconazole, itraconazole, voriconazole, and terbinafine generate low MICs for Fonsecaea isolates. Itraconazole and voriconazole appear to have better in vitro activity than amphotericin B. Caspofungin is also active in vitro against Fonsaceae pedrosoi [558].Fluconazole, on the other hand, has no practical in vitro activity against Fonsecaea [1130, 1131, 1490, 1491, 1864].

For MICs of various antifungal drugs for Fonsecaea, see our N/A(L):susceptibility database.