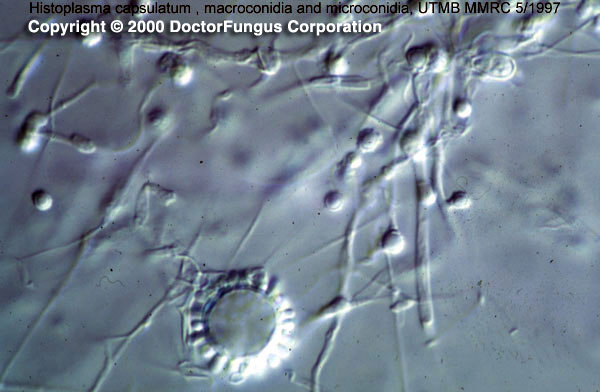 At 35°C, as an intracellular budding yeast Histoplasma is a thermally dimorphic fungus found in nature. Soil contaminated with bird droppings or excrements of bats is the common natural habitat for Histoplasma. Although it is claimed to exist worldwide, tropical areas are where this fungus is more frequently encountered. It is endemic in the Tennessee-Ohio-Mississippi river basins [462].

See the summary of synonyms and teleomorph-anamorph relations for the Histoplasma sp.

Histoplasma capsulatum is the causative agent of a true systemic (endemic) mycosis called histoplasmosis. The spectrum of the disease is wide, varying from an acute benign pulmonary infection to a chronic pulmonary or fatal disseminated disease. Following acquisition of the conidia by inhalation, lungs are primarily involved. In cases of dissemination of Histoplasma capsulatum var. capsulatum infection, reticuloendothelial system (RES) is most frequently involved. The fungus resides intracellularly in RES cells [2067]. Histoplasma capsulatum may also rarely involve the thyroid glands and may be isolated in fungemia [201, 512, 716, 858]. Unlike var. capsulatum, var. duboisii rarely involves the lungs but commonly involves the bones and skin. Var. duboisii is the causative agent of African histoplasmosis [930].

Given the true systemic nature of histoplasmosis, otherwise healthy individuals are affected. However, dissemination and fatal course are more common in the immunocompromised and elderly. Chronic cavitary histoplasmosis is most commonly observed in individuals with underlying pulmonary disease [462, 2202].

Being a thermally dimorphic fungus, Histoplasma capsulatum grows in mould form at 25°C, and in yeast form at 37°C. Below are the macroscopic characteristics at varying temperatures and for both varieties [1295, 2144].

At 25°C
Colonies are slow growing and granular to cottony in appearance. The color is white initially and usually becomes buff brown with age. The colonies are not sensitive to cycloheximide in the culture media. From the reverse, a yellow or yellowish orange color may be observed. While these features are best observed on Sabouraud dextrose agar (SDA), brain heart infusion agar (BHIA) enhances growth more efficiently.

For definitive identification of the fungus, yeast-to-mould conversion should be demonstrated.

At 25°C
Hyphae are septate and hyaline. Histoplasma capsulatum produces hyphae-like conidiophores which arise at right angles to the parent hyphae. It has both macro- and microconidia. Macroconidia are tuberculate, thick-walled, round, unicellular, hyaline, large and often have fingerlike projections on the surface. These macroconidia are also referred to as tuberculochlamydospores or macroaleurioconidia. Microconidia (microaleurioconidia) are unicellular, hyaline and round, with a smooth or rough wall.

Conversion to a yeast phase at 37°C, specific exoantigen testing, and nucleic acid hybridization methods differentiate Histoplasma capsulatum from both genera. Antigen detection in clinical samples offers a rapid way for diagnosis of histoplasmosis [2416] [749]. Also, Chrysosporium does not produce tuberculate macroconidia and Sepedonium does not produce microaleuriconidia [2144].

Isolates of Histoplasma must be handled with caution in a biological safety cabinet.

Data on in vitro activity of Histoplasma capsulatum are yet limited. The NCCLS antifungal susceptibility testing methods have not been standardized for testing the activity of this fungus. Amphotericin B, voriconazole, itraconazole, and posaconazole in general yield relatively low MICs for Histoplasma capsulatum [683, 1152, 1338]. Fluconazole generally appears active, but resistance may develop [2413]. The echinocandins, caspofungin and anidulafungin have relatively higher MICs [683], and one in vivo study found caspofungin to have little activity [1221].

(E):NIOSH page on protection of workers at risk for exposure to histoplasmosis