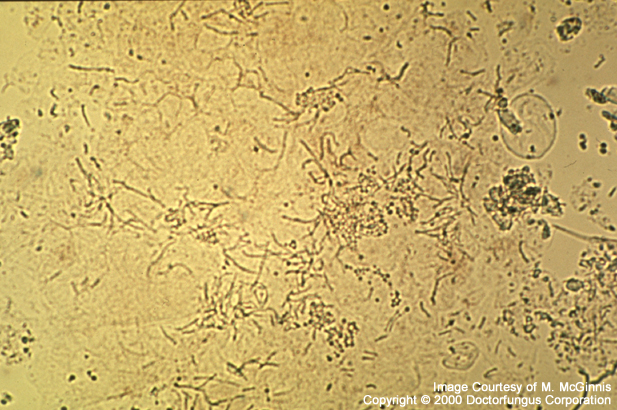 Malassezia is a lipophilic yeast found on skin and body surfaces of humans and animals. It has been shown that colonization with Malassezia may occur as early as neonatal period [790]. It is a member of the normal skin flora in as much as 90{64e6c1a1710838655cc965f0e1ea13052e867597ac43370498029d1bc5831201} of adults and may occasionally cause superficial and deep mycoses. Malassezia has no known teleomorphic phase.

There are seven proposed species in the genus Malassezia based on molecular, morphological, and biochemical profiles [276, 924, 948, 1361, 2077, 2395]. The most common and well-known species are Malassezia furfur and Malassezia pachydermatis [1216]. See the complete list of active species and summary of synonyms for the Malassezia spp.

Malassezia infections are mostly endogenous and originate from the colonized skin [240]. They may occur in otherwise healthy individuals as well as immunocompromised hosts, such as bone marrow transplant recipients, patients with cancer or AIDS [55, 755, 908, 1251, 1464, 1582].

The most common clinical picture caused by Malassezia furfur is pityriasis versicolor [947]. It may also cause seborrheic dermatitis [55], folliculitis [1019], neonatal pustulosis [1874], blepharitis [2250], and white piedra [1364]. Given the lipophilic nature of the fungus, fungemia, catheter-related infections and sepsis due to Malassezia furfur may occur particularly in patients who are on parenteral nutrition with lipids [129, 146, 176, 510, 1603, 2050]. Noteworthy, colonization of the catheters with Malassezia may occur in absence of lipid administration as well [298]. Malassezia globosa and Malassezia sympodialis are also common causes of pityriasis versicolor in humans [947, 1684].

Malassezia colonies grow rapidly and mature in 5 days at 30-37°C. Growth is weak when it is incubated at 25°C. The colonies are raised and smooth initially and get dry and wrinkled in time. The color of the Malassezia furfur colonies is creamy yellow to brown while those of Malassezia pachydermatis are cream-colored initially and become buff to orange beige in time [531, 1295, 2202].

Yeast-like conidia are the predominant structures. These cells are globose to ellipsoidal in shape and round at one end and blunt at the other. The blunt site is where bottle-shaped, unipolar budding occurs from the phialides with small collarettes. The width of the bud with respect to that of the mother cell may vary from one species to other. Occasionally, few rudimentary hyphal elements are also observed. Sexual spores do not exist [531, 1295, 2202].

Direct microscopic examination of the skin scrapings reveals yeast cells and hyphal fragments. This appearence resembles to and is called spaghetti and meatballs [2202].

Very limited data are available. The results of the in vitro susceptibility studies done so far showed that amorolfine, bifonazole, itraconazole, and terbinafine MICs varied considerably among isolates of Malassezia furfur. The MICs obtained for other less commonly encountered species were also variable [1047, 1615, 1767, 1887]. In another comparative study, ketoconazole appeared to be more active than econazole and miconazole against Malassezia isolates. Of note, Malassezia furfur was the least susceptible Malassezia species to ketoconazole, econazole, miconazole, and tea tree oil [977].

For MICs of various antifungal drugs for Malassezia, see our N/A(L):susceptibility database.

Oral ketoconazole or itraconazole are commonly used for treatment of pityriasis versicolor [2199]. Antifungal therapy and removal of the catheter are the guidelines for treatment of catheter-related infections. Amphotericin B therapy may be used in these patients with catheter infections [2050].