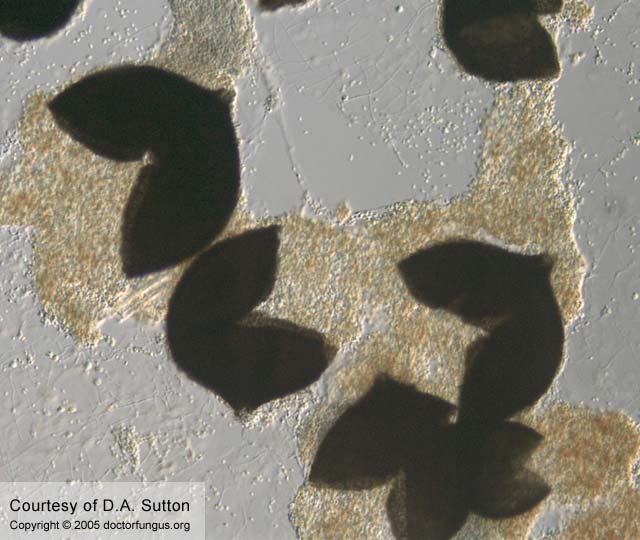 Colonies on potato dextrose agar at 25°C are initially buff, becoming gray to olivaceous to brown. Colonies reach 4-6 cm in diameter after 4 weeks. Texture is funiculose (in rope-like strands) with a mealy appearance. A clear exudate may occur in the center, and after a few weeks perithecia appear as small black dots in concentric rings.

Hyphae are septate and hyaline initially, darkening with age. The Scopulariopsis cinerea anamorph is dematiaceous, with conidiophores arising from the vegetative hyphae either singly or in groups. Annellophores are centrally inflated, tapering toward the ends. Annelloconidia are borne in long chains, are truncate at the basal end, sometimes papillate, and measure approximately 3.5-5 x 3-4 µm. The sexual structures, perithecia, are black, globose, approximately 100-350 µm in diameter, and have very short necks. Asci are mostly oval measuring 8.5-9.0 x 7.5-8.5 µm. Ascospores are pale reddish-brown, concavo-convex to plano-convex (like sections of an orange) and measure 4.5-5.5 x 2.5-3 µm [531], [2202].

There are several dematiaceous Scopulariopsis species, some of which go on to produce teleomorphs in the genus Microascus. Phaeoid Scopulariopsis cultures should be held for extended periods to ascertain whether these anamorphs will eventually produce their perithecial teleomorphs. Microascus cinereus is distinguished from M. cirrosus and M. trigonosporus primarily by the size of the perithecia, the length of the necks, and the shape of the ascospores. It has been reported as the etiologic agent of a human nail infection [18], an agent of maxillary sinusitis coexisting with Aspergillus repens [147], suppurative cutaneous granulomata in a patient with chronic granulomatous disease [1439], endocarditis of a prosthetic valve implanted after a staphylococcal endocarditis of a native valve [403], and a brain abscess in a bone marrow transplant recipient [152].