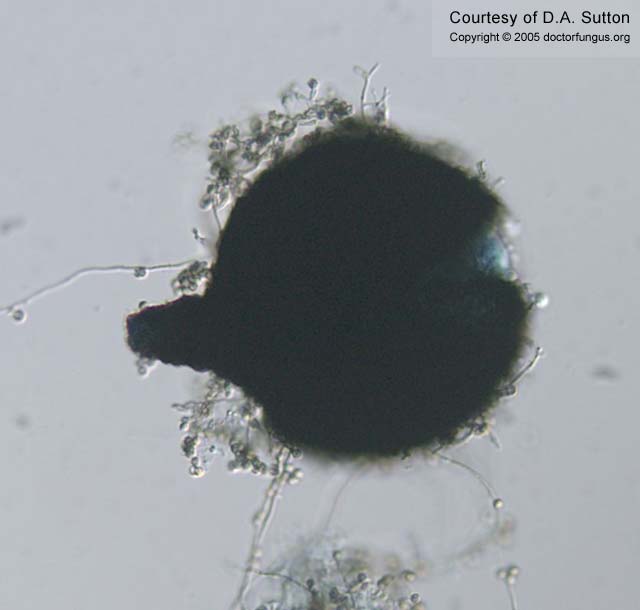 Colonies on potato dextrose agar at 25°C are initially gray, later becoming olivaceous-brown and then reddish-brown with the production of perithecia and the liberation of ascospores. This species is rather slow growing, reaching a diameter of 3-4 cm in 6 weeks. Colonies are mealy in appearance and zonate with perithecia developing in concentric rings.

Hyphae are septate and hyaline initially, darkening with age. The Scopulariopsis paisii anamorph is dematiaceous with somewhat inflated annellophores arising from the vegetative hyphae mostly singly, but sometimes in groups. Annelloconidia are pale brown, are borne in tangled chains, are globose to subglobose, smooth to delicately roughened, and measure 3.5-4.5 x 3-4 µm. The sexual structures, perithecia, are black and spherical, may be superficial or partly immersed, measure approximately 175-250 µm in diameter, and have cylindrical necks up to 100 µm in length. At maturity, ascospores are extruded from these necks in a long cirrus (like toothpaste being squeezed out from a tube). Asci are ovate, 9-14 x 7-11 µm, and evanescent (breakdown before release of ascospores). Ascospores are plano-convex to slightly concavo-convex, i.e., heart-shaped, 4.5-6.5 x 3-5 µm, and light brown to reddish in mass [531], [2202]

There are several dematiaceous Scopulariopsis species, some of which go on to produce teleomorphs in the genus Microascus. Phaeoid Scopulariopsis cultures should be held for extended periods to ascertain whether these anamorphs will eventually produce their perithecial teleomorphs. Microascus cirrosus is distinguished from M. cinereus and M. trigonosporus by the size of the perithecia, the length of the necks, and the shape of the ascospores. The organism has been reported as a etiologic agent of onychomycosis [542] and of a disseminated infection in a pediatric bone marrow transplant recipient [1253].