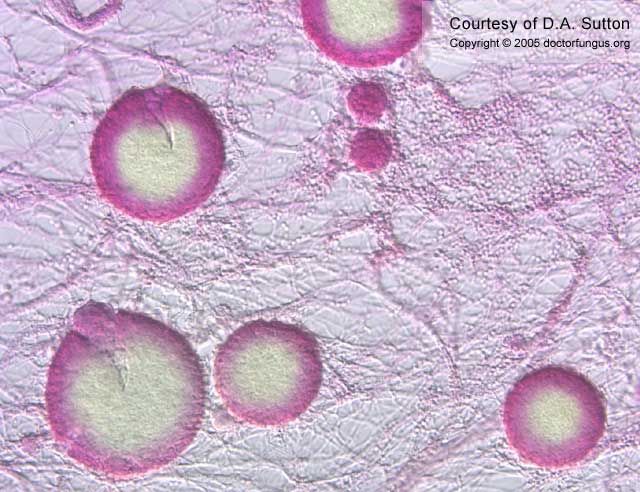 Colonies on potato dextrose agar at 25°C are white to buff and somewhat restricted. A clear to amber exudate may be present.

Hyphae are septate and hyaline. The Scopulariopsis candida anamorph is hyaline, with annellophores arising mostly singly from the vegetative hyphae. Annellophores are long and narrow, bearing dry chains of hyaline annelloconidia that remain smooth at maturity. Annelloconidia measure 6-8 x 5-6 µm. The sexual structures, perithecia, are dark brown to black, globose at the base, measure 100-175 µm in diameter, with an apical papilla (very short cone-shaped protrusion at the opening, or ostiole). Perithecia are viewed as small black dots occurring in concentric rings. Asci are obovoidal (like an upside down egg), 8-spored, and measure 11-16 x 8-13 µm. Ascospores are pale straw-colored and heart-shaped, measuring 5-6 x 4.5-5 µm. [531], [2202].

Production of perithecia in Microascus manginii may require more than two weeks incubation. The Scopulariopsis candida anamorph is distinguished from the more common Scopulariopsis brevicaulis by its colonial morphology that is white and membranous rather than buff to sand-colored and granular, and by the hyaline annelloconidia that remain smooth at maturity, rather than becoming echinulate. The Scopulariopsis candida anamorph was reported as an etiolgic agent in invasive sinonasal disease in a 12-year-old girl being treated for non-Hodgkin’s lymphoma [1252]. Recent molecular studies sequencing a 350 pb gene region of the large subunit ribosomal RNA gne (LSU rDNA) suggests that most opportunistic human pathogenic Scopulariopsis species are placed in the ‘Microascus manginii Clade’ [1101]