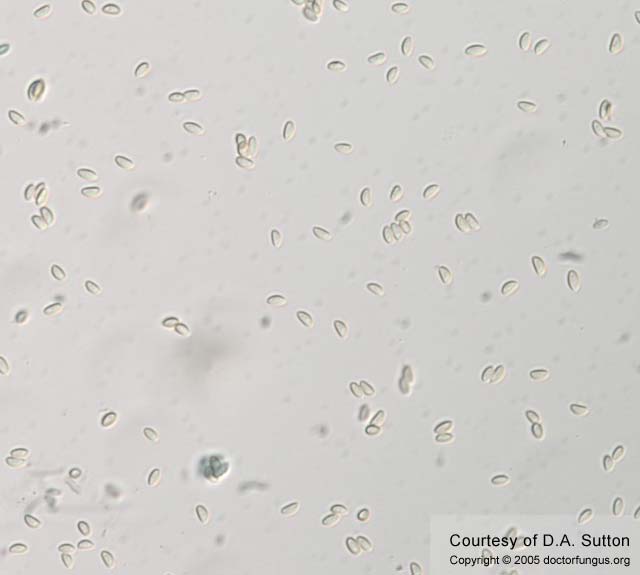 Microascus is a filamentous fungus that inhabits soil, plant material, feathers, animal dung, and insects. It is distributed worldwide.

The genus Microascus, containing approximately 15 species, is unique in that it contains both moniliaceous (hyaline) and dematiaceous (phaeoid) members, with several such as Microascus cinereus, M. cirrosus, M. trigonosporus, and M. manginii being clinically significant. Species differentiation is based mostly upon the size and shape of the perithecia, the length of the necks, and the shape of the ascospores [191], [1584]. Many species produce a Scopulariopsis anamorph [191], [1584].

Microascus species have emerged as significant invasive pathogens in the immunocompromised patient. They are also frequently recovered as the Scopulariopsis anamorph in more superficial settings and as agents of onychomycosis. Microascus cinereus has been reported as the etiologic agent of a human nail infection [18], an agent of maxillary sinusitis coesixting with Aspergillus repens [147], suppurative cutaneous granulomata in a patient with chronic granulomatous disease [1439], endocarditis of a prosthetic valve implanted after a staphylococcal endocarditis of a native valve [403], and a brain abscess in a bone marrow transplant recipient [152]. Microascus cirrosus has been reported as an agent of onychomycosis [542] and of a disseminated infection in a pediatric bone marrow transplant recipient [1253]. A fatal case of pneumonia in a bone marrow transplant recipient was reported by Mohammedi due to Microascus trigonosporus [1555]. The Scopulariopsis candida anamorph of Microascus manginii was reported as an etiologic agent in invasive sinonasal disease in a 12-year-old girl being treated for non-Hodgkin’s lymphoma [1252].

Colonies on potato dextrose agar are frequently somewhat restricted, mealy in appearance, and may be white to buff to grayish or brownish. A clear to amber exudate may be present. Perithecia often develop in concentric rings and appear as small black dots. These may become reddish with the liberation of ascospores.

Hyphae are septate. Perithecia are superficial or immersed, and are produced singly or in clusters. They are mostly black, spherical to pyriform, and may have very short to noticeably long cylindrical necks. Asci are 8-spored, oval, and evanescent. Ascospores are nonpsetate, smooth-walled, straw-colored when mature (reddish-brown in mass), and may be boat-, kidney-, or heart-shaped in lateral view, depending upon the species. They are liberated through the opening (ostiole) in the neck in the form of a long cirrus. Chains of either hyaline or phaeoid annelloconidia from the Scopulariopsis anamorph may also be present.

In vitro antifungal susceptibility data for Microascus species is very limited. Isolates generally appear resistant to currently available antifungals, particularly to the azoles and 5-fluorocytosine, and have MICs similar to those seen for Scopulariopsis species [22]. A case of disseminated disease due to Microascus cirrosus was successfully treated with high dose amphotericin B and long-term itraconazole therapy [1439]. Also see the species Microascus cirrosus for unpublished FTL in vitro data.