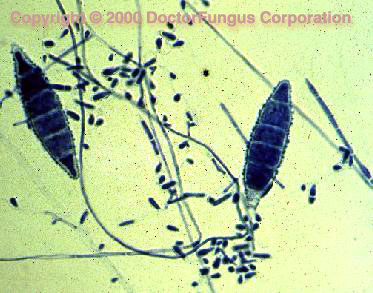 The genus Microsporum includes 17 conventional species. Among these, the most significant are:

Molecular studies for taxonomic reclassification of Microsporum spp. are in progress [885].

See the summary of synonyms and teleomorph-anamorph relations for the Microsporum spp.

Microsporum is one of the three genera that cause dermatophytosis. Dermatophytosis is a general term used to define the infection in hair, skin or nails due to any dermatophyte species. Similar to other dermatophytes, Microsporum has the ability to degrade keratin and thus can reside on skin and its appandages and remains noninvasive. As well as the keratinase enzyme, proteinases and elastases of the fungus may act as virulence factors. Notably, Microsporum spp. mostly infect the hair and skin, except for Microsporum persicolor which does not infect hair. Nail infections are very rare. The pathogenesis of the infection depends on the natural reservoir of the species. Geophilic spp. are acquired via contact with soil. Zoophilic species are transmitted from the infected animal. Direct or indirect (via fomites) human-to-human transmission is of concern for anthropophilic species. Asymptomatic carriage may be observed. As well as the otherwise healthy hosts, immunocompromised patients are also infected [54, 462, 657, 774, 806, 1192, 1679, 1959, 2400].

Microsporum colonies are glabrous, downy, wooly or powdery. The growth on Sabouraud dextrose agar at 25°C may be slow or rapid and the diameter of the colony varies between 1 to 9 cm after 7 days of incubation. The color of the colony varies depending on the species. It may be white to beige or yellow to cinnamon. From the reverse, it may be yellow to red-brown. As are discussed on separate pages for each species, varieties in macroscopic morphology and color help in inter-species differentiation [2144].

Microsporum spp. produce septate hyphae, microaleurioconidia, and macroaleurioconidia. Conidiophores are hyphae-like. Microaleuriconidia are unicellular, solitary, oval to clavate in shape, smooth, hyaline and thin-walled. Macroaleuriconidia are hyaline, echinulate to roughened, thin- to thick-walled, typically fusiform (spindle in shape) and multicellular (2-15 cells). They often have an annular frill. Inoculation on specific media, such as potato dextrose agar or Sabouraud dextrose agar supplemented with 3 to 5{64e6c1a1710838655cc965f0e1ea13052e867597ac43370498029d1bc5831201} sodium chloride may be required to stimulate macroconidia production of some strains. As are discussed on separate pages for each species, varieties in shape of macroconidia and abundance of microconidia help in inter-species differentiation [2144].

Microsporum differs from Trichophyton and Epidermophyton by having spindle-shaped macroconidia with echinulate to rough walls [2144].

In vitro susceptibility tests for dermatophytes are not yet standardized and available data are limited. Most investigators prefer to use the modifications of the NCCLS (M38P) methodology in the interim for testing the dermatophytes [1622]. Terbinafine and itraconazole appear active in vitro against Microsporum spp. However, this fungus was found to be the least terbinafine-susceptible dermatophyte in vitro in one of the studies [1119, 1554, 2282].

While griseofulvin was once the drug of choice for treatment of infections due to Microsporum as well as other dermatophytes, safer and more efficacious alternatives are now available and preferred. Oral therapy with terbinafine and itraconazole are very widely used for treatment of Microsporum infections [552, 657, 775, 1012, 1334, 1335].

For MICs of various antifungal drugs so far reported for Microsporum, see our susceptibility database.