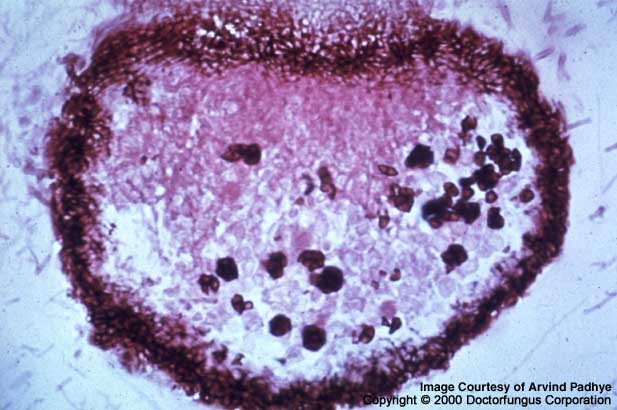 (described by Segretain and Destombes in 1961)

Neotestudina is a non-pigmented mycelium-producing fungus isolated from soil in tropical areas. It is one of the etiologic agents of mycetoma in man and produces granules (grains) in vivo [462, 531].

See the summary of synonyms for Neotestudina sp.

Neotestudina rosatii causes white grain mycetoma. (A):Mycetoma is a chronic subcutaneous infection that starts after traumatic implantation of the fungus into the subcutaneous tissue via contact with soil. The fungus produces large aggregates in the tissue composed of filaments, which eventually lead to abscess formation. These aggregates are called grains. Neotestudina rosatii produces white granules which are non-pigmented and pale in color initially but may become dark in time. The granules are 0.5-1 mm in diameter, and oval or round in shape. They usually have angular edges.

The abscess may drain onto the skin surface via sinuses or involve the surrounding bones, leading to osteomyelitis. The infection does not disseminate to distant organs or systems. However, chronic infection may gradually produce severe deformities and disabilities of the involved extremity [462, 531, 705, 1482, 1486].

The colonies of Neotestudina are slow growing, woolly, compact, and with radial grooves. From the front, the color is gray to brown. From the reverse it is dark brown. The maximum temperature of growth for Neotestudina is 40°C [462, 531].

Ascostromata, asci, and ascospores are visualized. Ascostromata are composed of plates of radiating cells. They are without ostioles (openings), black, round and bear the asci inside. Asci are located in the center of the ascostromata and are round to clavate-shaped, and thick-walled. Asci contain 8 ascospores inside. Ascospores are dark brown, smooth, variable in size (9-12.5 x 4.5-8 µm), two-celled with a transverse septum, and have a germ pore at each end [462, 531].

Granules (0.5-1 mm in diameter) that are composed of branching septate hyphae are visualized in the infected tissue. These granules are compact with cement-like matrix. Polymorphonuclear leukocytes and other inflammatory cells accumulate around these structures.

The genus Ulospora differs from Neotestudina by having ascospores with longitudinal furrows.

No in vitro data are available.

There are no data on optimal treatment of Neotestudina infections. Moreover, there is no standard regimen used for treatment of mycetoma due to any of the causative agents. Importantly, the optimal therapeutic agent may vary depending on the infecting fungus. In general, amphotericin B, ketoconazole, and itraconazole have been used for treatment of mycetoma. However, the prognosis is usually poor and recurrences are common. Administration of antifungal therapy for several years may be required. Surgical interventions are frequently needed for correction of the deformities. Surgical excision and amputation may be done in selected refractory cases for complete cure [705, 1482, 1486, 1895, 2312, 2403].