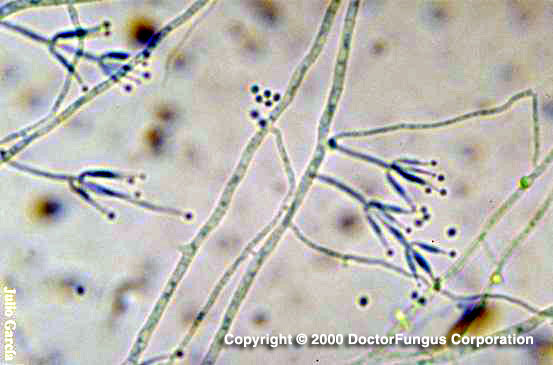 See the list of obsolete names, synonyms, and telemorphs for Paecilomyces spp.

Paecilomyces species can cause various infections in humans. These infections are occasionally referred to as paecilomycosis. Corneal ulcer, keratitis, and endophthalmitis [1772] due to Paecilomyces may develop following extended wear contact lens use or ocular surgery. Paecilomyces is among the emerging causative agents of opportunistic mycoses in immunocompromised hosts [908]. Direct cutaneous inoculation may lead to these infections [1695]. These infections may involve almost any organ or system of human body. Soft tissue [2437], pulmonary [355], and cutaneous infections [1695, 1998], cellulitis [1110], onychomycosis [746], sinusitis [923, 1938], otitis media [585], endocarditis [969, 1476, 2109, 2274], osteomyelitis [456], peritonitis [482, 1238, 1928], and catheter-related fungemia [412, 2221] have all been reported. Paecilomyces species can also cause allergic disorders, such as allergic alveolitis [33].

Paecilomyces can cause infections in animals as well. It has been reported as a cause of hyalohyphomycosis in various animals, such as cats [663], laboratory rats [1265], turtles [1833], and goats [1754].

Colonies of Paecilomyces grow rapidly and mature within 3 days. Paecilomyces crustaceus and Paecilomyces variotii are thermophilic and can grow well at temperatures as high as 50° and possibly 60°C. The colonies are flat, powdery or velvety in texture. The color is initially white, and becomes yellow, yellow-green, yellow-brown, olive-brown, pink, or violet, depending on the species. The reverse is dirty white, buff or brown. A sweet aromatic odor may be associated with older cultures [531, 1295, 2144].

Septate hyaline hyphae, conidiophores, phialides, conidia, and chlamydospores are observed. Conidiophores (3-4 µm wide and 400-600 µm long) are often branched and carry the phialides at their tips. The phialides are swollen at their bases and taper towards their apices. They are usually grouped in pairs or brush-like clusters. Conidia are unicellular, hyaline to darkly colored, smooth or rough, oval to fusoid, and form long chains. Chlamydospores are occasionally present [1295, 2202].

Septate hyphae may be observed. See also our histopathology page.

For MICs of various antifungal drugs for Paecilomyces, see our N/A(L):susceptibility database.