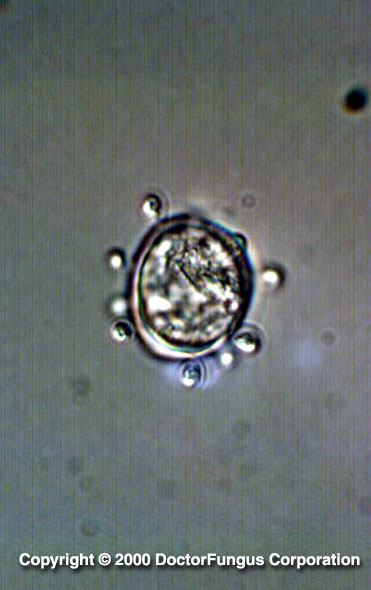 KOH preparation of a specimen with P. brasiliensis
(Image courtesy of Julio Garcia)

Paracoccidioides is a thermally dimorphic fungus. Although it has been isolated from soil and digestive tract of some animals, its natural habitat remains unknown. It mostly resides in soil which is humid and rich in proteins. It has been cultivated from fruit bats and armadillos. While the epidemiology of the infections due to Paracoccidioides has not been fully clarified, most infections with Paracoccidioides have been reported from Central and South America, particularly from Brazil, Venezuela, and Colombia. Geographic discrimination of the strains have recently been possible by randomly amplified polymorphic DNA analysis [363] [462, 2107, 2144, 2202].

See the summary of synonyms and teleomorph-anamorph relations for the Paracoccidioides sp.

Paracoccidioides brasiliensis is the causative agent of a true systemic (endemic) mycosis called paracoccidioidomycosis. The spectrum of the disease is wide, varying from an asymptomatic infection verified by the skin test to a subclinical, symptomatic or chronic infection. Diagnosis of paracoccidioidomycosis is often difficult. The infection may become apparent several years after exposure to Paracoccidioides brasiliensis, suggesting the possibility of a long latent period. The infection is presumably acquired via inhalation of the conidia, followed by primary infection of the lungs. The degree of pathogenicity may vary and appears strain-dependent. An exocellular serine-thiol proteinase enzyme is a significant virulence factor of the fungus for tissue invasion. In addition to the primary pulmonary form of the disease, acute pulmonary, chronic pulmonary, and disseminated forms may also be observed. In cases of disseminated paracoccidioidomycosis, reticuloendothelial system, skin and mucous membranes are frequently involved. Lymph nodes may also be infected during the course of the infection. Aortitis may develop [462, 1430, 1557, 1851, 1896, 2202].

Being a thermally dimorphic fungus, Paracoccidioides brasiliensis grows in mould form at 25°C and in its yeast form at 37°C. Below are its macroscopic characteristics at varying temperatures [1295, 2144, 2202].

Colonies are filamentous, slow growing, leathery, flat to wrinkled, woolly, cottony or glabrous to velvety. The colony matures and its diameter reaches to 1 to 2 cm in 2 to 3 weeks. The front color is white cream, tan or brown and the reverse color is yellowish brown to brown.

Colonies are yeast-like, white, heaped, wrinkled or folded. Mould to yeast conversion usually occurs on enriched medium, such as brain heart infusion agar and following 10 to 20 days of incubation.

For definitive identification of the fungus, mould-to-yeast conversion should be demonstrated.

It produces hyaline, septate hyphae and aleuriconidia. The hyphae are often sterile and do not sporulate. If present, conidia are oval, unicellular, truncate and with a broad base and rounded apex. They are located along the hyphae. Arthroconidia and intercalary chlamydospores may also be observed.

It produces typical multiple buds which surround the whole surface of the mother yeast cell. This appearance resembles a steering-wheel. The daughter cell (bud) is attached to the mother cell by a narrow neck portion. Before the bud is detached from the mother cell, secondary buds may form, producing short chains of yeast cells.

Although most strains are sterile and do not sporulate, it is in general accepted that isolates of Paracoccidioides brasiliensis must be handled with caution in a biological safety cabinet.

In vitro data on susceptibility profile of Paracoccidioides brasiliensis are limited. There is as yet no reference method standardized for this purpose and the methods that have been used for susceptibility testing also vary, making meaningful comparisons difficult. In general, relatively low MICs have been detected for amphotericin B, ketoconazole, itraconazole, fluconazole, and voriconazole tested against yeast phase of Paracoccidioides brasiliensis [965, 966, 1152]. However, higher itraconazole and fluconazole values have been reported for some isolates in another study [1493]. High MICs were obtained also for cilofungin, the first echinocandin [982].

For MICs of various antifungal drugs so far reported for Paracoccidioides brasiliensis, see our N/A(L):susceptibility database.

While amphotericin B, sulphonamides, and ketoconazole have been used for treatment of paracoccidioidomycosis, itraconazole now appears as the drug of choice [328, 1394].