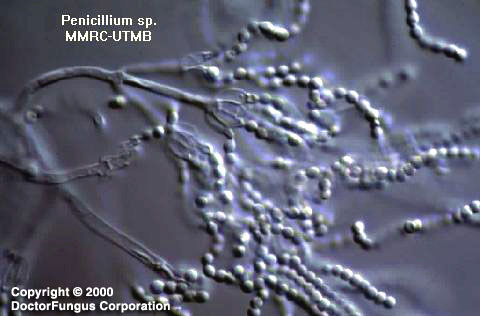 With only one exception (Penicillium marneffei, which is thermally dimorphic), the members of the genus Penicillium are filamentous fungi. Penicillium spp. are widespread and are found in soil, decaying vegetation, and the air. Showing again how it is distinct from other species in this genus, Penicillium marneffei is endemic specifically in Southeast Asia where it infects bamboo rats which serve as epidemiological markers and reservoirs for human infections.

See the summary of species and synonyms for the Penicillium spp.

Penicillium spp. are occasional causes of infection in humans and the resulting disease is known generically as penicilliosis. Penicillium has been isolated from patients with keratitis [581], endophtalmitis, otomycosis, necrotizing esophagitis, pneumonia, endocarditis, peritonitis, and urinary tract infections. Most Penicillium infections are encountered in immunosuppressed hosts. Corneal infections are usually post-traumatic [581]. In addition to its infectious potential, Penicillium verrucosum produces a mycotoxin, ochratoxin A, which is nephrotoxic and carcinogenic. The production of the toxin usually occurs in cereal grains at cold climates [1804].

The colonies of Penicillium other than Penicillium marneffei are rapid growing, flat, filamentous, and velvety, woolly, or cottony in texture. The colonies are initially white and become blue green, gray green, olive gray, yellow or pinkish in time. The plate reverse is usually pale to yellowish [531, 1295, 2144, 2202].

Penicillium marneffei is thermally dimorphic and produces filamentous, flat, radially sulcate colonies at 25°C. These colonies are bluish-gray-green at center and white at the periphery. The red, rapidly diffusing, soluble pigment observed from the reverse is very typical. At 37°C, Penicillium marneffei colonies are cream to slightly pink in color and glabrous to convoluted in texture [531, 1295, 2144, 2202].

For species other than Penicillium marneffei, septate hyaline hyphae (1.5 to 5 µm in diameter), simple or branched conidiophores, metulae, phialides, and conidia are observed. Metulae are secondary branches that form on conidiophores. The metulae carry the flask-shaped phialides. The organization of the phialides at the tips of the conidiophores is very typical. They form brush-like clusters which are also referred to as “penicilli”. The conidia (2.5-5µm in diameter) are round, unicellular, and visualized as unbranching chains at the tips of the phialides [1295, 2144].

Penicillium marneffei is easily induced to produce the arthroconidial yeast-like state by subculturing the organism to an enriched medium like BHI and incubating at 35°C, in which after a week, yeast-like structures dividing by fission and hyphae with arthroconidia are formed [531, 1295, 2144, 2202].

Intracellular arthroconidial yeast-like cells are observed inside the macrophages in infected tissues [531].

Penicillium differs from Paecilomyces by having flask-shaped phialides and globose to subglobose conidia; from Gliocladium by having chains of conidia; and from Scopulariopsis by forming phialides. Penicillium marneffei differs as well by its thermally dimorphic nature.

For MICs of various antifungal drugs for Penicillium, see our N/A(L):susceptibility database.