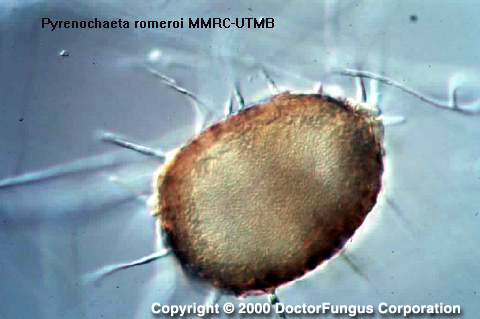 Pyrenochaeta is a dematiaceous filamentous fungus that inhabits the soil and plant debris, particularly in tropical climates. Pyrenochaeta species are pathogens for various plant species and among the rare causes of some specific human infections.

See the list of obsolete names, synonyms, and telemorphs for Pyrenochaeta spp.

Colonies of Pyrenochaeta grow moderately rapidly. They are flat and woolly to cottony. From the front, the color is white initially and becomes olivaceous green to olivaceous gray. Reverse is dark [531, 2202].

Septate, hyaline to subhyaline hyphae, pycnidia, and conidia are observed. Pycnidia (sing. pycnidium; round or flask-shaped fruiting body containing conidia) are globose to flask-shaped and ostiolate. They are brown to black and have setae (rigid hair located on the pycnidia) arising from their upper portion. Phialides arise from the inner lining of the pycnidia. Conidia (2-4 x 1-2 µm) are one-celled, oval to cylindrical, hyaline, and straight or slightly curved [531, 2202].

Pyrenochaeta differs from Phoma by having setae.

Ketoconazole has so far been used in treatment of cases with mycetoma due to Pyrenochaeta romeroi [2312].