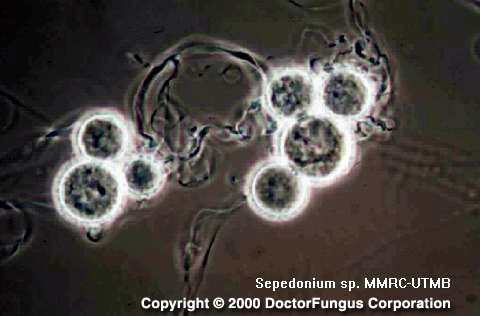 Sepedonium is a filamentous fungus that inhabits the soil and plant material. It is commonly considered as a contaminant. Sepedonium ampullosporum is known to produce ampullosporin, a 15-membered peptaibol-type antibiotic.

No diseases due to Sepedonium spp. have so far been reported.

Colonies of Sepedonium grow moderately rapidly and mature in 7 days. They grow well at 25°C. At 37°C, no or very poor growth is observed. At 25°C, the colonies are waxy and white initially and become woolly to cottony and yellow in time. From the reverse, the color is white [1295].

Septate hyphae, simple or branched conidiophores, and conidia are visualized. Conidia are one-celled, large (7-17 µm) and terminally located on the conidiophores. They are solitary, hyaline to amber in color and globose to ovoid in shape. These conidia are typically thick-walled, rough and knobby in appearence, resembling the macroconidia of Histoplasma capsulatum [1295]. Phialides and a Verticillium stage may be present.