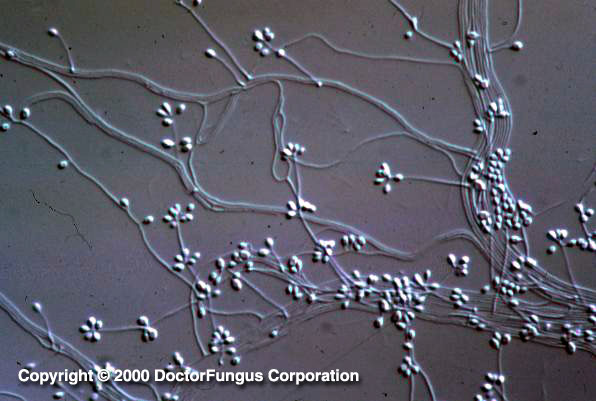 (described by Hektoen and Perkins in 1900) Conidia arising directly from the hyphae and conidia arising on denticles from sympodial conidiophores are typical of Sporothrix schenckii.

Sporothrix schenckii has a yeast form at 37°C. Young colonies of Sporothrix schenckii remain white for some time at 25°C or when incubated at 37°C to induce its yeast phase. Older colonies of Sporothrix schenckii turn black due to the production of dark conidia that arise directly from the hyphae.

Sporothrix is a thermally dimorphic fungus which is distributed worldwide and isolated from soil, living and decomposing plants, woods, and peat moss. Sporothrix schenckii is an occasional cause of human infections. Ophiostoma stenoceras is the teleomorph of Sporothrix sp.

See the summary of teleomorphs, synonyms and obselete names for the Sporothrix spp.

Sporothrix schenckii is the causative agent of sporotrichosis (“rose handler’s disease”) [1909]. Sporotrichosis is a subcutaneous infection with a common chronic and a rare progressive course. The infection starts following entry of the infecting fungus through the skin via a minor trauma and may affect an otherwise healthy individual. Following entry, the infection may spread via the lymphatic route. Nodular lymphangitis may develop [1240, 2242]. Interestingly, an epidemic of sporotrichosis after sleeping in a rust-stained camping tent has been reported and the tent was identified as the source of infection [369]. Patients infected with Sporothrix schenckii may be misdiagnosed as pyoderma gangrenosum due to the large ulcerations observed during the course of sporotrichosis [354].

Fugomyces cyanescens is frequently considered to be nonpathogenic. It is avirulent in animal models and human cases in general do not suggest a clinical syndrome [2104]. However, pulmonary lesions and pneumonia due to Fugomyces cyanescens have been reported in organ transplant recipients [910, 2219].

I. Sporothrix schenckii. It is a thermally dimorphic fungus and the macroscopic morphology varies depending on the temperature of growth. At 25°C, colonies grow moderately rapidly. They are moist, leathery to velvety, and have a finely wrinkled surface. From the front and the reverse, the color is white initially and becomes cream to dark brown in time (“dirty candle-wax” color). At 37°C, colonies grow moderately rapidly. They are yeast-like and creamy. The color is cream to beige. The conversion of the mould form to the yeast form is required for definitive identification of Sporothrix schenckii [1295, 2144, 2202].

II. Fugomyces cyanescens. At 25°C, colonies are velvety to powdery and slightly raised in texture. From the front, the color is initially white and turns to pale purple in time. From the reverse, an intense lavender-colored diffusing pigment formation is typical. This pigment is produced on potato dextrose agar after an incubation of about 3 weeks while it is usually not expressed on Sabouraud dextrose agar. The production of this lavender-colored pigment helps in differentiation of Fugomyces cyanescens from Sporothrix schenckii [2202].

I. Sporothrix schenckii. Similar to its macroscopic morphology, microscopic features of Sporothrix schenckii also vary depending on the temperature of growth. At 25°C, septate hyaline hyphae, conidiophores, and conidia are observed. Conidiophores are sympodial and appear weakly differentiated from the vegetative hyphae. They often have an inflated base and arise at right angles from the hyphae. Conidia have two types. The first type are unicellular, hyaline to brown, oval, thin-walled, and are typically arranged in rosette-like clusters at the tips of the conidiophores. The second type of conidia are brown (dematiaceous),oval or triangular, thick-walled, cessile, and are attached directly to the sides of the hyphae. The latter type of conidia are typically present only in freshly isolated strains. At 37°C, Sporothrix schenckii produces oval to cigar-shaped (also called “cigar bodies”) yeast cells. Single or multiple buds may be produced by a single yeast cell [1295, 2144, 2202].

III. Ophiostoma stenoceras. Being the teleomorph of Sporothrix sp., this fungus produces a long-necked perithecia (the round or pear-shaped structure with an ostiole and containing asci and ascospores inside) after an incubation of 2-3 weeks [2144].

Yeast cells may be observed in the infected tissues/samples [1010]. These yeast cells may be intracellular (within the macrophages) and may have an apparent halo [717]. See also our histopathology page.

For MICs of various antifungal drugs for Sporothrix schenckii, see our N/A(L):susceptibility database.