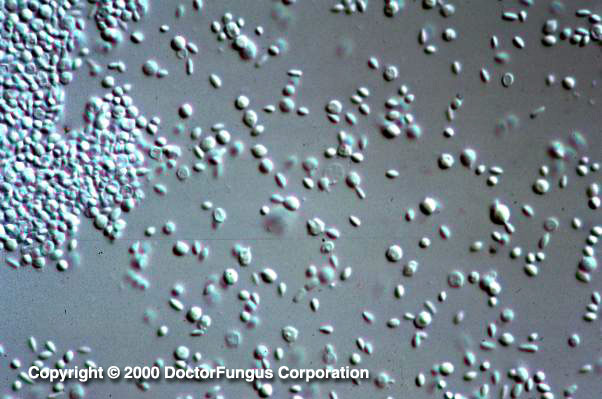 
Sporotrichosis refers to the infection caused by the dimorphic fungus N/A(L):Sporothrix schenckii. The disease has been described worldwide, however it is more common in tropical and subtropical America [1898, 2251]. Sporotrichosis is acquired through direct inoculation into the skin and rarely via inhalation of conidia. As a consequence, the majority of cases are localized lesions affecting the skin and subcutaneous tissues with minimal if any systemic manifestation. Skin lesions characteristically follow lymphatic pathways, but the lymph nodes themselves are not usually involved. The initial erythematous papulonodular lesions evolve into either smooth or verrucose painless nodules of about 3 cm that may ulcerate and drain [1909]. There is also a clinical variety called “the fixed form” [241, 1273]. The most common form of extracutaneous sporotrichosis is osteoarthritis. Pulmonary sporotrichosis has also been described. Disseminated forms of disease are seen on occasion, and these classically affect immunosuppressed individuals [1396, 2440]. With the advent of the HIV epidemic the frequency of this presentation has increased [39, 282, 606]. lymphocutaneous lesions spreading up the arm

Typical colony of Sporothrix schenckii in its mould phase

Special resource: You may also want to refer to the Infectious Disease Society of America-Mycoses Study Group (IDSA-MSG) Practice Guidelines for this disease. It is available at the (E):IDSA website.

Sporotrichosis is in general an indolent infection that requires prolonged therapy but usually responds [1168]. Due to the temperature sensitivity of the fungus, local application of hyperthermia can be used for the treatment of cutaneous lesions. However, systemic therapy, especially with oral azoles such as itraconazole, has shown to be very effective [1898, 2086]. Therapy with iodide (given as a saturated solution of potassium iodide, or SSKI) is also effective [1168]. Treatment is continued for 3 to 6 months in cases of skin lesions and at least 12 months for osteoarticular forms [1168]. Prognosis of disseminated disease is grave. Amphotericin B is reserved to treat relapsed lymphocutaneous disease, pulmonary, disseminated sporotrichosis as well as for serious infections presenting during pregnancy [1168]. Antibacterial antibiotics are useful when secondary bacterial infections occur.

The pattern of inflammation is characteristically well circumscribed and granulomatous with central areas of acute suppuration. In the skin, this pattern is similar to that seen in blastomycosis and coccidioidomycosis. Demonstration of the organism in tissue may be difficult because the fungi are not numerous. It may be necessary to search through many serial sections before observing the organism. The fungus is yeast-like, subglobose to ovoid, and 3-5 µm in diameter. The organisms are often described as cigar-shaped. The yeasts are not encapsulated. An asteroid body may be present and consists of globose to ovoid, basophilic cells, 3-5 µm in diameter with radiating eosinophilic rays up to 10 µm in diameter. An asteroid body formation appears to be more common in secondary lesions than in primary ones.

Inoculate the aspirates, material from Culturettes, or swabbings from open lesions onto Sabouraud dextrose agar and/or Inhibitory Mould Agar and/or BHI with Gentamycin and Chloramphenicol with 10{64e6c1a1710838655cc965f0e1ea13052e867597ac43370498029d1bc5831201} sheep blood, and a medium containing cycloheximide. Incubate the media at 30°C. Growth is usually present in 3-5 days.