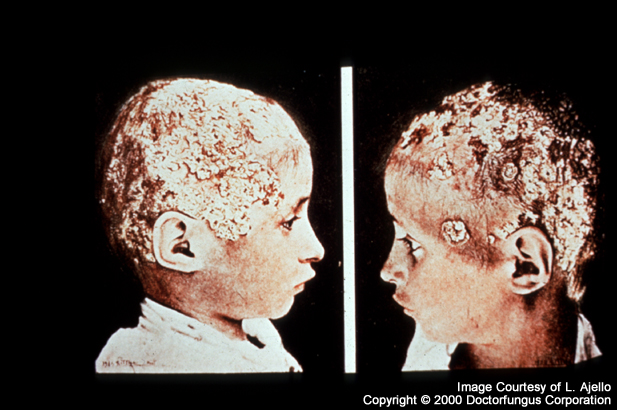 Ringworm of the scalp and hair

Tinea capitis is the fungal infection of the scalp due to dermatophytes. The hair of head, eyebrows, eyelashes may also be involved. The skin may be involved alone, as is seen with infection due to N/A(L):Trichophyton rubrum.

There are three forms of hair infection. In the form known as endothrix, the infection begins by penetration of the hair, and the organism then grows up the interior main axis of the hair where it fragments into arthroconidia. A typical causative agent is T. tonsurans. The exception to the rule about arthroconidia formation is Trichophyton schoenleinii. This organism causes an endothrix-style growth, but without the arthrocondia. Instead, channels are formed within the hair shaft. This is useful diagnostically, as air bubbles move along these channels when an infected hair is immersed in a liquid. This later form of infection, as well as the clinical presentation of scutula, carries the special label (A):Tinea favosa, or favus [402, 657].

In the form of hair infection known as ectothrix, the infection begins as in endothrix, but it then extends back out through the hair cuticle (the outer wall of the hair) and forms a mass of arthroconidia both within and around the hair shaft. A typical causative agent is N/A(L):Microsporum canis [840].

Tinea capitis is characteristically a fungal infection affecting children between 4 and 14 years of age [321]. Although a (A):large list of fungal pathogens have been implicated, Trichophyton tonsurans is responsible for more than 90{64e6c1a1710838655cc965f0e1ea13052e867597ac43370498029d1bc5831201} of cases in North America and the United Kingdom. Urban cases are commonly acquired from classmates or family members. Overcrowding, poor hygiene and protein malnutrition favor the occurrence of this disease [1447]. Cases caused by N/A(L):Microsporum canis occur sporadically and are acquired from puppies and kittens [1045].

The forms of Tinea Capitis are:

In contrast with other forms of dermatophytoses, tinea capitis should be treated with oral agents. Griseofulvin and ketoconazole have been extensively used, however terbinafine, itraconazole, and fluconazole are also recomended [616].

A pruritic papular rash that commonly affects the outer helix of the ears may appear after the introduction of therapy and should not be confused with a drug reaction [1045].

Some patients may need either intralesional or short oral courses of corticosteroids. Surgical approaches such as incision and drainage of kerion are not suggested. Bacterial superinfections are common, and antibiotic treatments may be neccesary [616, 1045].

Topical therapy with selenium sulphide, and povidone iodine shampoos are recommended twice a week to reduce infectivity, but should not be used as the sole therapeutic agents [1045].

Tinea favosa is usually considered a variety of (A):Tinea capitis because it classically involves the scalp, however, this mycotic infection may also involve glabrous skin and nails.

Favus is a disease of rural areas where poor hygiene and malnutrition are frequent [1447]. It generally affects groups of family, reason why it is postulated that prolonged and intimate contact is neccesary for transmission [1137].

Favus is characterized by the occurrence of dense masses of mycelium and epithelial debris forming yellowish cup-shaped crusts called scutula. The scutulum develops at the surface of a hair follicle with the shaft in the center of the raised lesion. Removal of these crusts reveals an oozing, moist, red base. After a period of years, atrophy of the skin occurs leaving a cicatricial alopecia and scarring. Scutula may form on the scalp or the glabrous skin.

Therapeutic considerations for tinea favus are the same as for (A):Tinea capitis [616].