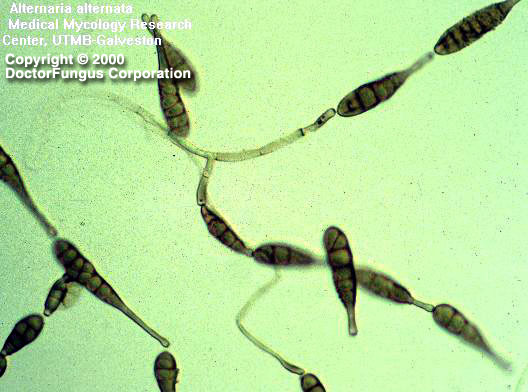 Alternaria is a cosmopolitan dematiaceous (phaeoid) fungus commonly isolated from plants, soil, food, and indoor air environment. The production of melanin-like pigment is one of its major characteristics. Its teleomorphic genera are called Clathrospora and Leptosphaeria.

See the summary of synonyms and teleomorph-anamorph relations for the Alternaria spp.

Alternaria spp. have emerged as opportunistic pathogens particularly in patients with immunosuppression, such as the bone marrow transplant patients [1581] [2297]. They are one of the causative agents of phaeohyphomycosis. Cases of onychomycosis, sinusitis, ulcerated cutaneous infections, and keratitis, as well as visceral infections and osteomyelitis due to Alternaria have been reported [66, 802, 1429, 2042]. In immunocompetent patients, Alternaria colonizes the paranasal sinuses, leading to chronic hypertrophic sinusitis. In immunocompromised patients the colonization may end up with development of invasive disease[2306]. It is among the causative agents of otitis media in agricultural field workers [2345].

Since Alternaria species are cosmopolitan and ubiquitous in nature, they are also common laboratory contaminants. Thus, their isolation in culture requires cautious evaluation [1847].

Alternaria spp. grow rapidly and the colony size reaches a diameter of 3 to 9 cm following incubation at 25°C for 7 days on potato glucose agar. The colony is flat, downy to woolly and is covered by grayish, short, aerial hyphae in time. The surface is greyish white at the beginning which later darkens and becomes greenish black or olive brown with a light border. The reverse side is typically brown to black due to pigment production [462, 1295, 2144].

Alternaria spp. have septate, brown hyphae. Conidiophores are also septate and brown in color, occasionally producing a zigzag appearance. They bear simple or branched large conidia (7-10 x 23-34 µm) which have both transverse and longitudinal septations. These conidia may be observed singly or in acropetal chains and may produce germ tubes. They are ovoid to obclavate, darkly pigmented, muriform, smooth or roughened. The end of the conidium nearest the conidiophore is round while it tapers towards the apex. This gives the typical beak or club-like appearance of the conidia [462, 1295, 2144].

Dark colored filamentous hyphae are observed in the sections of infected tissue stained with H&E. If the pigment formation is not obvious, Fontana-Masson silver stain, which is specific to melanin, may be applied [462].

In vitro susceptibility testing for phaeoid fungi is not standardized yet. The in vitro activity of some novel antifungal drugs has so far been investigated. While caspofungin was shown to be active in vitro against Alternaria [558], voriconazole also appeared promising and generated lower MICs than itraconazole for Alternaria strains [1864, 2432].

Amphotericin B and flucytosine therapy may achieve successful clinical outcome in phaehyphomycosis. Treatment with fluconazole, itraconazole, or terbinafine may also be effective [590]. However, further data are required to clarify their actual place in treatment of Alternaria infections.

For MICs of various antifungal agents so far reported for Alternaria, see our N/A(L):susceptibility database.