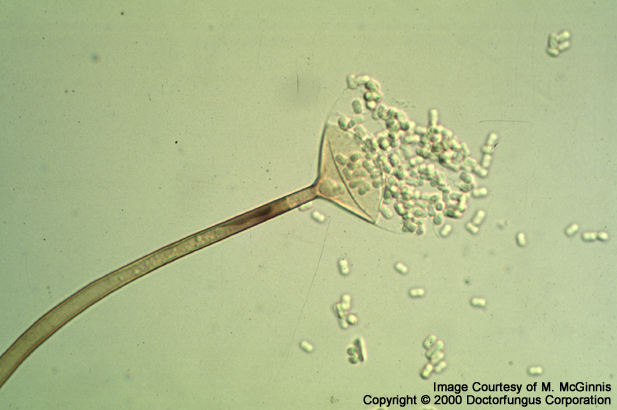 (described by Misra, Srivastava, and Lata in 1979)

Apophysomyces is a filamentous fungus that is widely distributed in soil and decaying vegetation as a common environmental contaminant. It is found most commonly in tropical to subtropical regions [462].

Apophysomyces elegans is a rare cause of human zygomycosis [1918, 2428]. The infection is usually acquired via traumatic implantations, such as accidental injuries, insect bites, surgery, and contamination of burn wounds. Invasive soft tissue infections develop on burns or wounds contaminated by soil. Unlike other zygomycosis, the affected host is usually otherwise immunocompetent. Apophysomyces elegans infections present most commonly as necrotizing fasciitis, osteomyelitis, and angioinvasion [472, 1287, 2428]. Systemic [1306] and secondary renal and bladder infections [1683] have also been reported.

Apophysomyces elegans colonies are fluffy and cottony. The inoculated plate is filled with profuse woolly mycelium in 2 to 3 days. Surface of the colony is white initially and turns to brownish gray or yellowish cream as the culture gets older. Reverse is white to pale yellow [462, 1295].

Apophysomyces elegans is a thermotolerant fungus. It grows rapidly at 42°C. Its growth is favorable also at 26°C and 37°C.

Similar to that of the other members of the class Zygomycetes, Apophysomyces elegans has nonseptate, broad (4-8 µm in diameter), branching hyphae . Sparse septations may occasionally be observed. Rhizoids arise either between the points where the sporangiophores originate or opposite to the sporangiophores. Sporangiophores are long (max. 530 µm), unbranched, and straight or curved. They arise from a foot cell-like hyphal segment and taper slightly towards the apex. There exists a subapical thicker portion which is darker and brownish in color. The apex of the sporangiophore widens to form a typical funnel- or bell-shaped apophysis. The columella of Apophysomyces elegans looks like a half circle and sporangia are pyriform (pear-shaped). The sporangia are hyaline initially and become colored by maturation. Upon dissolution of the sporangium, a small collar remains at the base of the columella. Sporangiospores of Apophysomyces elegans are smooth-walled and oblong (3-4×5-8 µm in size). They may be pale brown in color. Zygospores are formed in existence of compatible mating strains [462, 1295].

Among the other members of zygomycetes, Apophysomyces elegans mostly resembles Absidia. However, its bell-shaped (but not conical) apophyses, existence of the foot-cell, rhizoids produced opposite to the sporangiophores upon cultivation on plain agar, the darker and thicker subapical segment, and inability to sporulate on routine culture media help in differentiation of Apophysomyces elegans [1295].

In vitro susceptibility data reported so far are very limited [Sutton, Fothergill, Rinaldi, 1998]. MIC breakpoints for interpretation of in vitro susceptibility results have not been defined. Some of the isolates may yield relatively low amphotericin B MICs. Similar to the other members of the class Zygomycetes, amphotericin B appears as the sole antifungal drug which may be active against Apophysomyces elegans. Extensive surgical debridement and amphotericin B therapy may be efficacious in vivo [1683].

For MICs of various antifungal drugs so far reported for Apophysomyces, see our N/A(L):susceptibility database.