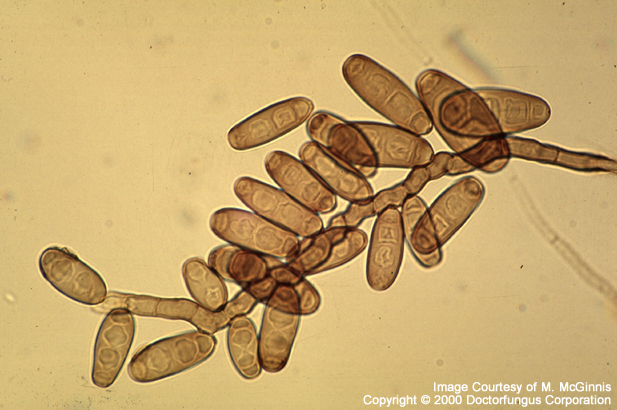 Bipolaris is a dematiaceous, filamentous fungus. It is cosmopolitan in nature and is isolated from plant debris and soil. The pathogenic species have known teleomorphic states in the genus Cochliobolus and produce ascospores.

See the summary of synonyms and teleomorph-anamorph relations for the Bipolaris spp.

As well as being isolated as saprophytes on plants, Bipolaris may be pathogenic to certain plant species, particularly to Graminiae and also to animals, such as the dog [2387]. It may cause nasal mycotic granuloma in the cattle [1753]. Bipolaris may also be isolated as a laboratory contaminant.

Bipolaris colonies grow rapidly, reaching a diameter of 3 to 9 cm following incubation at 25°C for 7 days on potato dextrose agar. The colony becomes mature within 5 days. The texture is velvety to woolly. The surface of the colony is initially white to grayish brown and becomes olive green to black with a raised grayish periphery as it matures. The reverse is also darkly pigmented and olive to black in color [462, 1295, 2144].

The hyphae are septate and brown. Conidiophores (4.5-6 µm wide) are brown, simple or branched, geniculate and sympodial, bending at the points where each conidium arises from. This property leads to the zigzag appearance of the conidiophore. The conidia, which are also called poroconidia, are 3- to 6-celled, fusoid to cylindrical in shape, light to dark brown in color and have sympodial geniculate growth pattern. The poroconidium (30-35 µm x 11-13.5 µm) is distoseptate and has a scarcely protuberant, darkly pigmented hilum. This basal scar indicates the point of attachment to the conidiophore. From the terminal cell of the conidium, germ tubes may develop and elongate in the direction of longitudinal axis of the conidium [462, 1295, 1495, 1548, 2144].

Teleomorph production of Bipolaris is heterothallic. The perithecium is black in color, and round to ellipsoidal in shape. The ascospores are flagelliform or filiform, hyaline in nature and are found in clavate-shaped or cylindrical asci. Each ascus contains eight ascospores.

Phaeoid hyphae (diameter: 2-6 µm) with frequent septations are observed. The hyphae may be branched or constricted at points of septations [462].

Amphotericin B and ketoconazole are used in treatment of Bipolaris infections. Surgical debridement may be indicated in some cases, such as sinusitis [1936].