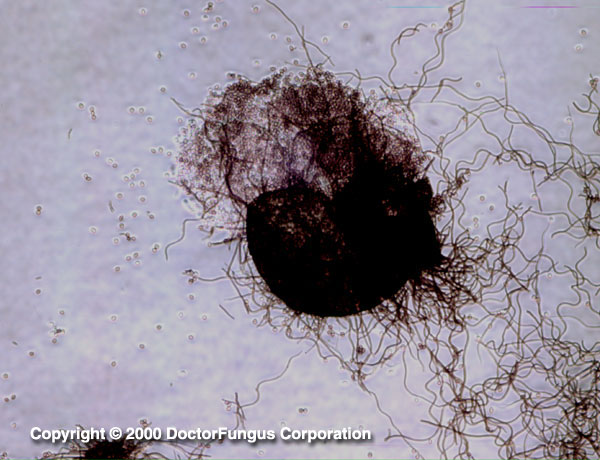 Ascospores and asci of Chaetomium Ascospores and asci of Chaetomium

Chaetomium is a dematiaceous filamentous fungus found in soil, air, and plant debris. As well as being a contaminant, Chaetomium spp. are also encountered as causative agents of infections in humans. Some species are thermophilic and neurotropic in nature [1295, 2202].

See the summary of synonyms for the Chaetomium spp.

Chaetomium colonies are rapidly growing, cottony and white in color initially. Mature colonies become grey to olive in color. From the reverse, the color is tan to red or brown to black [531, 1295].

Septate hyphae, perithecia, asci and ascospores are visualized. Perithecia are large, dark brown to black in color, fragile, globose to flask shaped and have filamentous, hair-like, brown to black appendages (setae) on their surface. Perithecia have ostioles (small rounded openings) and contain asci and ascospores inside. Asci are clavate to cylindrical in shape and rapidly dissolve to release their ascospores (4 to 8 in number). Ascospores are one-celled, olive brown in color, and lemon shaped [531, 1295].

Very few data are available and there is as yet no standard method for in vitro susceptibility testing of Chaetomium spp. While MICs of amphotericin B, ketoconazole, itraconazole, and miconazole were acceptably low, those of fluconazole and flucytosine appeared very high when a small number of Chaetomium atrobrunneum, Chaetomium funicola, and Chaetomium globosum isolates were tested [920, 1855]