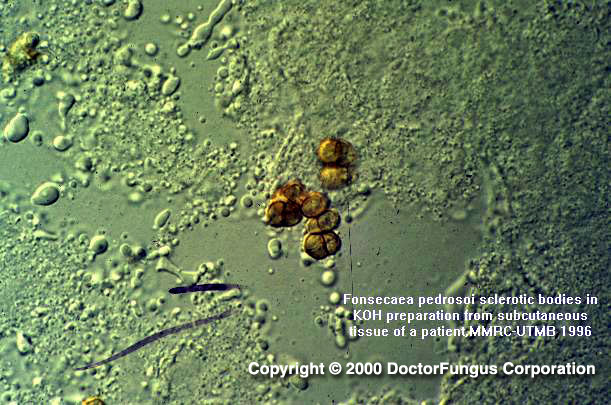 Chromoblastomycosis is a chronic localized infection of the skin and subcutaneous tissue that follows the traumatic implantation of the etiologic agent. The lesions are verrucoid, ulcerated, and crusted, and may be flat or raised 1-3 cm. Satellite lesions may develop following autoinoculation and by lymphatic spread to adjacent areas. The mycosis usually remains localized with extensive keloid formation. After many years, the lesions may resemble the head of a cauliflower [1485]. Many different fungi cause this disease. The disease takes its common name from the fact that most of the etiologic agents are dark-walled. Some of the causative agents (e.g., N/A(L):Fonsecaea pedrosoi and Phialophora verrucosa may disseminate to the brain [2093]. Elephantiasis and lymphatic stasis can occur as a result of secondary infections [692].

The infection usually remains localized, but hematogenous dissemination in the immunosuppressed host has been rarely reported with a grave prognosis [1388]. Early stages of chromoblastomycosis are treated with surgical excision, electrodesiccation, cryosurgery or topical antifungals [1797]. Thiabendazole, 5-fluorocytosine, and amphotericin B have all been used topically. Advanced cases may require systemic treatment for long periods of time. Itraconazole and terbinafine are the drugs of choice [287, 692, 1857]. Results with fluconazole have been dissapointing [589]. In vitro data is promising for voriconazole [1492].