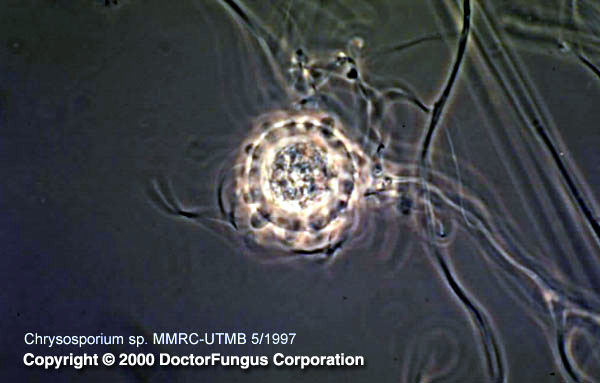 The species of Chrysosporium are differentiated from each other by the texture of the colony and morphology, location, and size of the conidia. Also, some species, particularly Chrysosporium pannicola, do not grow at 37°C [531].

See the summary of synonyms and telemorph-anamorph relations for the Chrysosporium spp.

Chrysosporium colonies grow moderately rapidly at 25°C. The morphology of the colonies is very variable. They may be granular, woolly, or cottony and flat, or raised and folded in appearance. From the front, the color is white cream, yellow or tan to pale brown. The reverse is white to brown [531, 1295, 2202].

Chrysosporium produces hyphae, conidia (aleuriconidia), and arthroconidia. Hyphae are septate while the conidia are hyaline, broad-based, one-celled, and smooth- or rough-walled. These conidia are broader than the vegetative hyphae and occur terminally on pedicels, along the sides of the hyphae, or in intercalary positions. The conidia usually have an annular frill which is the reminant of the hyphal wall that remains after detachment from the hypha. Arthroconidia, on the other hand, are abundant and larger than their parent hyphae in diameter. In addition, Chrysosporium parvum forms enlarged, thick-walled cells (adiaspores) at 37-40°C [531, 1295, 2202].

Chrysosporium differs from Blastomyces by not being dimorphic; from Microsporum and Trichophyton by lacking macroconidia; from Geomyces by lacking branched, fertile hyphae on erect conidiophores; and from Sepedonium by having hyaline conidia.

Very limited data are available. Amphotericin B, itraconazole, ketoconazole, and voriconazole tend to yield low MICs for Chrysosporium keratinophilum isolates. Fluconazole MICs are relatively higher than those of the just noted antifungal agents. Flucytosine, on the other hand, appears to have no in vitro activity against these isolates [2432].

For MICs of various antifungal drugs for Chrysosporium, see our N/A(L):susceptibility database.