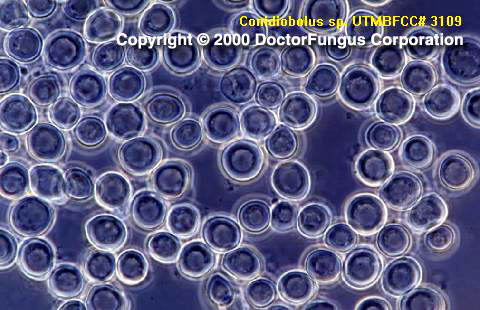 (described by Rixford and Gilchrist in 1896)

Conidiobolus is a mould found in soil and decaying plant debris. It is also isolated from insects and amphibians. The fungus is mostly distributed in tropical areas and particularly at Central America, equatorial Africa, and India. Conidiobolus spp. are the causative agents of infections in humans, sheep, dogs, deer, and horses [2202].

See the summary of synonyms and teleomorph-anamorph relations for the Conidiobolus spp.

The most common clinical picture caused by Conidiobolus spp. is a subcutaneous infection involving nasal mucosa and maxillofacial tissues. This chronic inflammatory granulomatous disease is also referred to as entomophthoromycosis conidiobolae. It involves facial subcutaneous tissues and paranasal sinuses, leading to formation of firm, subcutaneous nodules or polyps. The infection may be acquired via inhalation of spores or a minor trauma such as an insect bite. The infected host is frequently an otherwise healthy individual working outdoors in tropical areas. However, the infection may also develop in patients with underlying pathologies, such as neutropenia or Burkitt’s lymphoma. The organism is thus emerging as an opportunist. Very rarely, fatal, deeply invasive infections are encountered. Pulmonary and pericardial involvement have been reported [1295, 1918, 2202, 2368].

On potato dextrose agar and following incubation at 25°C, Conidiobolus spp. produce rapidly growing colonies which are glabrous and waxy initially and become powdery after development of aerial hyphae. The colonies mature in about 5 days. From the front, the color becomes tan to brown by aging. From the reverse, the colony is white. The spores forcibly discharged by the sporangiophores fill the sides of the inoculated tubes and plates [1295, 2202].

Broad hyphae (6-25 µm wide) which are nonseptate or sparsely septate are visualized in infected tissues. The hyphae typically have nonparallel contours [462].

Conidiobolus differs from Entomophthora by forming spherical to pyriform primary spores on unbranched sporangiophores, by having spores with four or more nuclei and a broadly rounded apex, by being cultured on routine media, and by having zygospores formed in the larger of two gametangia. Conidiobolus differs from Basidiobolus by having sporangiophores that are not swollen at their apices, by having primary spores with papillae, and by the absence of beaks associated with the zygospores.

There is yet no standard regimen for treatment of Conidiobolus infections. Potassium iodide, trimethoprim-sulfamethoxazole, and azole derivatives have been used [1895].