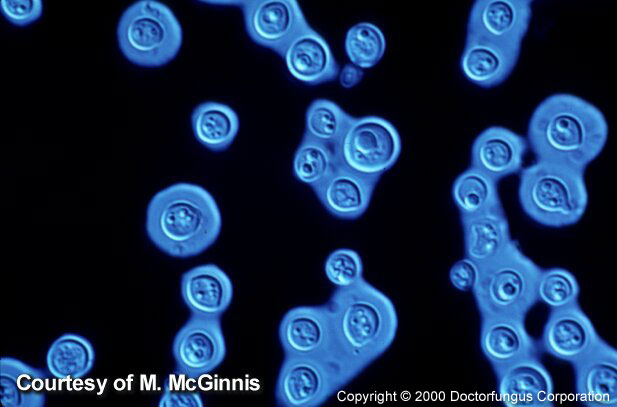 The genus Cryptococcus includes around 37 species. Among these, Cryptococcus neoformans is the only species that is pathogenic and will be discussed in this page. It has four serotypes (A to D). Serotyping is based on capsular agglutination reactions and can be detected by a dot enzyme assay [212]. Cryptococcus neoformans was generally accepted to include two varieties; var. gattii and var. neoformans [1326]. Until recently and traditionally, serotypes A and D were included in var. neoformans while serotypes B and D were included in var. gattii. However, in addition to the previously observed phenotypic differences, recent molecular studies have detected significant genetic variations between the two serotypes. Thus, it was recently proposed that a new variety, var. grubii, be created to contain serotype A [761]. This leaves serotype D as the sole serotype in var. neoformans.

The two varieties, neoformans and gattii are morphologically similar, except that basidiospores of var. neoformans are round and those of var. gattii are more elliptical in shape. The definitive identification of the two varieties is possible by biochemical tests, such as resistance to canavanine, use of glycine as the sole carbon and nitrogen source, and resistance of their urease enzymes to EDTA [462].

See the summary of synonyms and teleomorph-anamorph relations for the Cryptococcus spp.

Cryptococcus neoformans is the causative agent of cryptococcosis. Given the neurotropic nature of the fungus, the most common clinical form of cryptococcosis is meningoencephalitis. The course of the infection is usually subacute or chronic. Cryptococcosis may also involve the skin, lungs, prostate gland, urinary tract, eyes, myocardium, bones, and joints [157, 161, 175, 209, 338, 636, 956, 1280, 1638, 2066, 2126].

The polysaccharide capsule and phenol oxidase enzyme of Cryptococcus neoformans, as well as its ability to grow at 37°C, are its major virulence factors [447, 1760]. Recent data suggest that phospholipase enzymes may also play a role as one of the potential virulence factors [832]. The infection commonly starts following inhalation of the yeasts [462]. Phenol oxidase enzyme functions in production of melanin. The melanizing enzyme presumably prevents formation of toxic hydroxy radicals and thus protects the fungal cell from oxidative stress as well as the immune defense mechanisms of the host [391, 605, 1109].

On cornmeal tween 80 agar, Cryptococcus neoformans produces round, budding yeast cells. No true hyphae are visible. Pseudohyphae are usually absent or rudimentary. The capsule is best visible in India ink preparations. The thickness of the capsule is both strain-related and varies depending on the environmental conditions. Upon growth in 1{64e6c1a1710838655cc965f0e1ea13052e867597ac43370498029d1bc5831201} peptone solution, production of capsule is enhanced [1295].

Microscopically, globose to ovoid yeast cells that have a capsule, producing neither well-developed pseudohyphae nor true hyphae are typical for Cryptococcus neoformans. Cryptococcus neoformans differs from Candida by not forming well-developed pseudohyphae. The lack of arthroconidia differentiates it from Trichosporon and Geotrichum, the two genera that produce abundant arthroconidia [1295].

Biochemically, the members of the genus Cryptococcus are unable to ferment sugars, but do assimilate inositol and produce urease. Carotenoid pigment production is extremely variable. Cryptococcus neoformans produces phenoloxidase enzyme that results in production of melanin and thus a brown to black discoloration of the colony when it is grown on caffeic acid agar or bird seed agar. Cryptococcus differs from Rhodotorula by assimilating inositol, and from Candida glabrata by assimilating inositol and being urease positive [1295].

Please see our extended discussion of the usual susceptibility patterns of Cryptococcus spp.