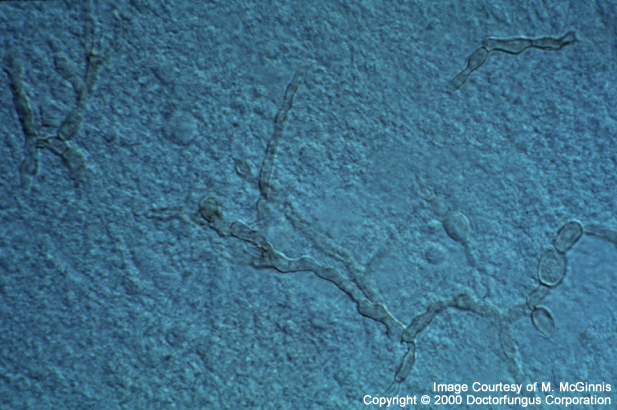 Exophiala is a dematiaceous fungus widely distributed in soil, plants, water, and decaying wood material. As well as being a saprophyte in nature, it is the causative agent of various human infections [531, 1295, 2202].

Several morphological and physiological differences aid in differentiation and identification of Exophiala spp. The morphological keys are summarized below.

Key to the Human Pathogenic Species of Exophiala

1. Yeast cells two-celled, usually the predominant form in the culture, rounded at one end, tapering towards the other with annellations at the tapering end; some annellides integrated within hyphae; annelloconidia one-celled, occasionally two-celled, accumulating in balls that tend to slide down the hyphae (Priorly known as Exophiala werneckii and Phaeoannelomyces werneckii and currently reclassified as Hortae werneckii)

See the summary of synonyms for the Exophiala spp.

Exophiala spp. are among the fungi causing infections wholly referred to as phaeohyphomycosis. Subcutaneous infections such as mycetoma and chromoblastomycosis may develop due to Exophiala isolates. These infections are usually acquired via traumatic implantation and are associated with the existence of local or systemic immunosuppression, such as organ transplantation. As well as infection and abscess formation in subcutaneous tissues, prosthetic valvular vegetations, fungemia, and disseminated infections due to Exophiala spp. have also been reported. Exophila pisciphila is a neurotropic species causing infections in fish as well as humans [449, 531, 533, 602, 908, 919, 1659, 2184, 2202].

Exophila spp. are initially yeast-like, moist, and brownish to greenish black in color. The texture of the colony eventually becomes velvety due to development of short, aerial grayish hyphae. The front color is olivaceous-black and the reverse is black in mature colonies [531, 1295, 2202].

In the young cultures, subspherical, budding, yeast-like cells are visualized. These cells often form long chains. As the culture gets older, septate hyphae which bear conidiogenous cells (annelides) are eventually formed. The annelides are tubular and rocket-shaped and typically taper to form a narrow elongated tip. Ellipsoidal, conidia (1-3×3-6 µm) are produced from the annelides. These conidia are usually one-celled and are found in clusters at the apices of annelides or at the sides of the conidiophores [531, 602, 1295, 2202].

Exophiala species differ from members of the genera Phialophora and Wangiella by forming annellides rather than phialides. Variations in decomposition of casein and tyrosine, ability to grow in 15{64e6c1a1710838655cc965f0e1ea13052e867597ac43370498029d1bc5831201} sodium chloride, KNO3 assimilation, and the maximum temperature of growth also help in differentiation of Exophiala from Phaeoannellomyces and Wangiella [1295].

For Exophiala jeanselmei, fluconazole yielded very high MICs. The MICs of flucytosine and miconazole appeared lower than fluconazole but were still relatively high. MICs of amphotericin B, ketoconazole, and voriconazole were similar and relatively low. The lowest MICs were obtained for itraconazole and terbinafine. Exophiala jeanselmei showed decreased susceptibility to both amphotericin B deoxycholate and ABLC in other workers’ hands. The novel echinocandin, caspofungin, on the other hand, yielded favorable in vitro activity against Exophiala jeanselmei isolates.

For Exophiala spiniphera, MICs of amphotericin B, itraconazole, and voriconazole were similar and encouragingly low.

For MICs of various antifungal drugs for Exophiala, see our N/A(L):susceptibility database.

The correlation of in vitro susceptibility with clinical outcome for Exophiala is not yet known. While there is no standard treatment, combination of surgical and antifungal treatment is usually preferred for subcutaneous Exophiala infections. Amphotericin B with or without flucytosine, itraconazole, and terbinafine have been used. The combination of amphotericin B, flucytosine and itraconazole appeared useful in a case with subcutaneous infection due to Exophiala jeanselmei [449, 462, 919, 2184, 2425].