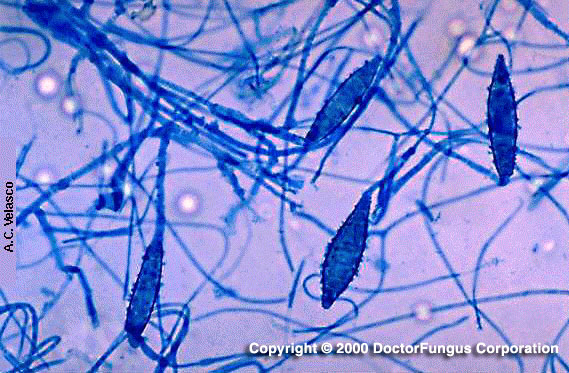 Microsporum canis grows rapidly and the diameter of the colony reaches 3 to 9 cm following incubation at 25°C for 7 days on Sabouraud dextrose agar. The texture is woolly to cottony and flat to sparsely grooved. The color is white to yellowish from the front and deep yellow to yellow-orange from the reverse.

Microsporum canis produces septate hyphae, macroconidia, and microconidia. Macroconidia are spindle-shaped, with an asymmetrical apical knob. They are 6- to 15-celled, long, rough and have thick outer cell walls. The septal walls are thin. Microconidia are rare, unicellular and clavate to pyriform in shape.

In vitro hair perforation test is positive. No special growth factor is required to grow Microsporum canis. No change in pH is observed following inoculation onto BCP-milk-solids-glucose agar. Its teleomorph is called Arthroderma otae. Microsporum canis differs from Microsporum audouinii by perforating hair and growing on polished rice grains. On the rice grains, a deep yellow pigment is typically produced by Microsporum canis.

The natural reservoir of Microsporum canis is cats and dogs. It causes tinea capitis and tinea corporis in humans. Rarely, mycetoma-like lesions have been observed in immunocompromised hosts.