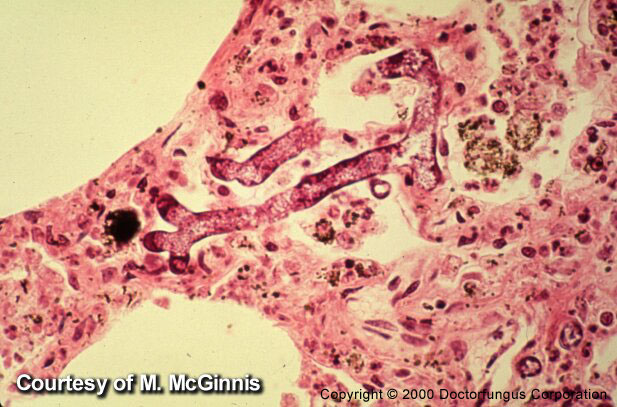 Mucormycosis (also known as zygomycosis) refers to the angiotropic (blood vessel-invading) infection produced by the various N/A(L):Zygomycetes. This disease is also sometimes referred to as mucormycosis, but the term zygomycosis is preferred. N/A(L):Click here to find out why! The most common species causing disease are N/A(L):Absidia corymbifera, N/A(L):Rhizomucor pusillus, and N/A(L):Rhizopus arrhizus.

Mycoses caused by members of the family Mucorales (and sometimes the family Entomophthorales) are generally acute and rapidly developing in debilitated patients. The disease is associated with the acidotic diabetics, malnourished children, and severely burned patients. It is also seen with leukemia, lymphoma, AIDS, and use of immunosuppressive therapy such as corticosteroids. The infection typically involves the rhino-facial-cranial area, lungs, gastrointestinal tract, skin, or less commonly other organ systems. The fungi show a predilection for vessel (arterial) invasion resulting in embolization and necrosis of surrounding tissue. Suppurative pyogenic reactions develop. Infections are typically acute and fulminant. Rhinocerebral disease in acidotic patients usually results in death, often within a few days [472, 911, 1097, 1233, 1528].

The prognosis is grave, especially when the rhinocerebral area is involved in patients with uncontrolled diabetes. Most cases of gastric and pelvic disease are diagnosed at autopsy. Many cases occur in patients with pulmonary disease, leukemia, or with lymphomas. These are usually fatal. Control of the diabetes, aggressive surgical debridement of involved tissue, and high doses of amphotericin B are recommended [1233, 1918]. Responses have been obtained with lipid formulations of amphotericin B and colony-stimulating factors, however, the experience with these agents is entirely anecdotal [866, 1470].

The tissue reaction is usually slight. Acute suppurative inflammation predominates with focal areas of granulomatous inflammation. Hyphae usually vary from 6-50 um in diameter, are sparsely septate, and irregularly branched. The organism characteristically invades the walls of adjacent blood vessels, producing thrombosis and infarction, but rarely disseminates through the vessels.

Direct examination A rapid diagnosis is critical. Fungal elements are usually not numerous in discharges. Scrapings from the upper turbinates, aspirated material from sinuses, sputum in pulmonary disease, and biopsy material mounted in 10{64e6c1a1710838655cc965f0e1ea13052e867597ac43370498029d1bc5831201} KOH typically contain thick-walled, refractile hyphae 6-15 um in diameter. Swollen cells (up to 50 um) and distorted hyphae may be present.

Isolation Inoculate the clinical material onto Sabouraud dextrose agar and incubate at 30°C. A medium containing cycloheximide is not used because these fungi are sensitive to cycloheximide. Sterile bread in a test tube may recover Zygomycetes when other media fail. A noninoculated tube of sterile bread is necessary for quality control, since Zygomycetes are commonly associated with bread.