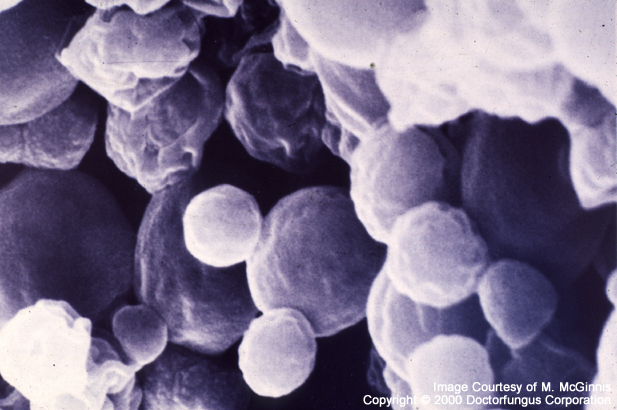 Phaeococcomyces is a dematiaceous yeast that inhabits the soil and the plant material. The taxonomic position and the nomenclature for the Phaeococcomyces species appear variable in the literature. Due to a problem of nomenclature, the genus Phaeococcomyces has been established as a replacement for Phaeococcus. On the other hand, nutritional physiological data suggest that Phaeococcomyces exophialae is a yeast-like synanamorph of Exophiala spinifera [530, 531, 961].

Based on a MedLine search, no infections due to Phaeococcomyces have so far been reported.

The colonies of Phaeococcomyces grow slowly. They are slimy, yeast-like to wrinkled, and black in color.

Yeast cells produce unicellular, globose to ellipsoidal conidia that are hyaline to dark brown or black. Pseudohyphae may be present. Hyphae are absent.