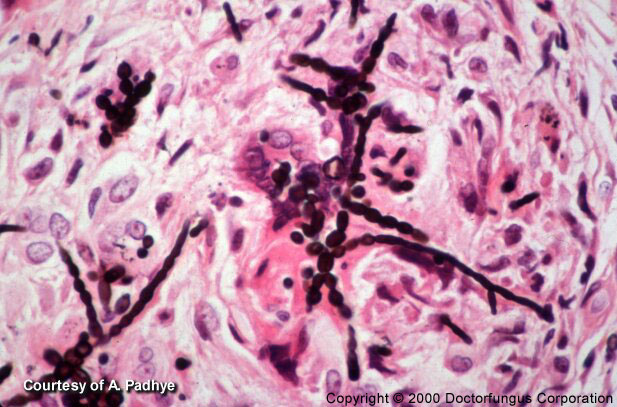 H and E stain of tissue with Exophiala spinifera H and E with GMS stain tissue with Exophiala spinifera Phaeohyphomycosis consists of a group of mycotic infections characterized by the presence of dematiaceous (dark-walled) septate hyphae and sometimes yeast or a combination of both in tissue. The hyphae may be short to elongate, distorted or swollen (toruloid hyphae), regularly shaped, or any combination of the above. The yeast when present will be variable in size and most of the time will show budding. The yeast should not be confused with the sclerotic Medler cells seen with the agents of chromoblastomycosis in subcutaneous tissue, although there are case reports of Wangiella (Exophiala) dermatitidis and Exophiala jeanselmei producing a combination of hyphae, yeast, and sclerotic cells from deep infections that otherwise could not be classified as chromoblastomycosis. Infections of the eyes and skin by the black fungi could also be classified as phaeohyphomycosis [9, 449, 700, 726, 1927, 2075, 2184].

Most cases of phaeohyphomycosis can be controlled by surgical excision and chemotherapy. Amphotericin B and 5-fluorocytosine or Itraconazole are the drugs of choice. Invasion of the brain or bone has a grave prognosis [9, 449, 700, 2344].

The histopathology is extremely varied, ranging from tissue reactions associated with walled abscesses to active tissue invasion by hyphae. Most of the time the hyphae will stain positive for the Fontana-Masson or other melanin stains.

Clinical materials such as pus and tissue are mounted in 10{64e6c1a1710838655cc965f0e1ea13052e867597ac43370498029d1bc5831201} KOH for examination. The dematiaceous nature of the hyphal elements is a key characteristic for the diagnosis of phaehyphomycosis. The hyphae may be regular in shape or variable. In some cases special stains such as Fontana may help in the diagnosis of the disease.

The specimens are inoculated onto Inhibitory Mould Agar and/or Saboraud Dextrose Agar and a medium containing cycloheximide and then incubated at 30°C. Many of the etiologic agents of phaeohyphomycosis are sensitive to cycloheximide. The cultures are discarded as negative in 4 weeks. The isolated fungus must be compatible with the clinical disease and tissue morphology (that is, dematiaceous) before it can be concluded that it is the etiologic agent involved.