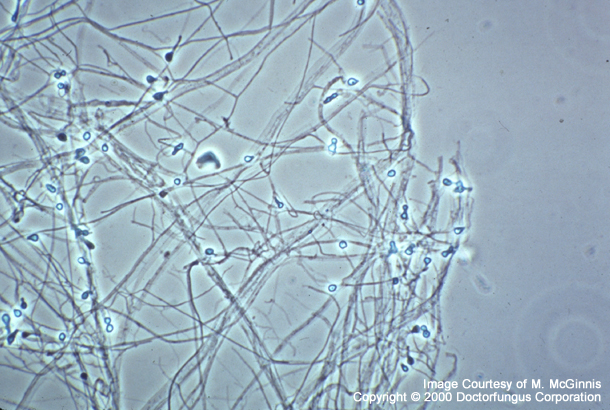 (described by Micheli ex Saint-Amans in 1821)

Mucor is a filamentous fungus found in soil, plants, decaying fruits and vegetables. As well as being ubiquitous in nature and a common laboratory contaminant, Mucor spp. may cause infections in man, frogs, amphibians, cattle, and swine. Most of the Mucor spp. are unable to grow at 37°C and the strains isolated from human infections are usually one of the few thermotolerant Mucor spp. [531, 1295, 2165, 2202].

See the summary of synonyms for Mucor spp.

Mucor spp. are among the fungi causing the group of infections referred to as zygomycosis. Although the term mucormycosis has often been used for this syndrome, zygomycosis is now the preferred term for this angio-invasive disease. Zygomycosis includes mucocutaneous and rhinocerebral infections, as well as septic arthritis, dialysis-associated peritonitis, renal infections, gastritis and pulmonary infections. Diabetic ketoacidosis and immunosuppression are the most frequent predisposing factors. Desferoxamine treatment, renal failure, extensive burns, and intravenous drug use may also predispose to development of zygomycosis. Vascular invasion that causes necrosis of the infected tissue, and perineural invasion are the most frustrating features of these infections. Of note, due to its relatively limited activity, itraconazole prophylaxis in immunosuppressed patients may select the fungi in phylum Zygomycota as the cause of infections [3, 8, 12, 19, 217, 234, 243, 277, 278, 279, 375, 763, 911, 1581, 1703, 1792, 1918, 2023, 2149, 2182].

Colonies of Mucor grow rapidly at 25-30°C and quickly cover the surface of the agar. Its fluffy appearance with a height of several cm resembles cotton candy. From the front, the color is white initially and becomes grayish brown in time. From the reverse, it is white. Mucor indicus is an aromatic species and may grow at temperatures as high as 40°C. Mucor racemosus and Mucor ramosissimus, on the other hand, grow poorly or do not grow at all at 37°C.

Nonseptate or sparsely septate, broad (6-15 µm) hyphae, sporangiophores, sporangia, and spores are visualized. Intercalary or terminal arthrospores (oidia) located through or at the end of the hyphae and few chlamydospores may also be produced by some species. Apophysis, rhizoid and stolon are absent. Sporangiophores are short, erect, taper towards their apices and may form short sympodial branches. Columella are hyaline or dematiaceous and are hardly visible if the sporangium has not been ruptured. Smaller sporangia may lack columella. Sporangia are round, 50-300 µm in diameter, gray to black in color, and are filled with sporangiospores. Following the rupture of the sporangia, sporangiospores are freely spread. A collarette may sometimes be left at the base of the sporangium following its rupture. The sporangiospores are round (4-8 µm in diameter) or slightly elongated. Zygospores, if present, arise from the mycelium [531, 1295, 2202].

The branching of sporangiophores (branched or unbranched), the shape of the sporangiospores (round or elongated), maximum temperature of growth, presence of chlamydospores, assimilation of ethanol, and molecular analysis aid in differentiation of Mucor spp. from each other [531, 1295, 2202, 2341].

For MICs of various antifungal drugs for Mucor, see our N/A(L):susceptibility database.

Similar to the other genera belonging to the phylum Zygomycota, treatment of Mucor infections remains difficult. Due to its property to invade vascular tissues, infarction of the infected tissue is commmon and mortality rates are very high. Early diagnosis is crucial and surgical debridement or surgical resection, as well as antifungal therapy, are usually required. Amphotericin B is the most commonly used antifungal agent. Liposomal amphotericin B and other lipid-based amphotericin B formulations, such as amphotericin B colloidal dispersion have also been used in some cases with zygomycosis.

Response rates are unfortunately unsatisfactory. Reversal of immunosuppression is one of the most significant factors influencing the clinical outcome. Adjuvant therapy with cytokines, particularly the colony stimulating factors, has anecdotally been associated with better clinical response [815, 1683]. There are also a few data on successful use of fluconazole and terbinafine in treatment of zygomycosis, which require validation. Interestingly, fluconazole in combination with trovafloxacin or ciprofloxacin proved to be effective in a murine model of pulmonary zygomycosis [292, 723, 763, 805, 887, 911, 1004, 1233, 1366, 1470, 1588, 1656, 1751, 1755, 1794, 2033, 2185, 2486].