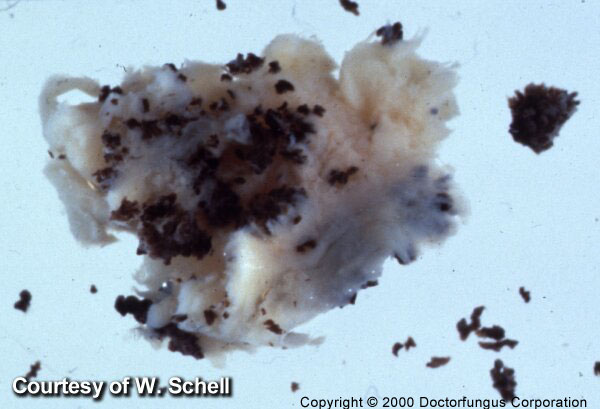 Sclerotia from a mycetoma case Mycetoma is a clinical syndrome characterized by tumefaction, draining sinuses, and sclerotia (granules, grains). Mycetomas are localized infections that involve cutaneous and subcutaneous tissue, fascia, and bone. Lesions consist of abscesses, granulomata, and draining sinuses. Following implantation of the etiologic agent, the primary lesion becomes locally invasive, indolent, tumorlike. It may also present with small, painless subcutaneous swellings. The lesions rupture, resulting in sinus tracts, swelling and distortion of the infected body part. Sclerotia are present in pus and in tissue around the draining sinus tracts [705, 1482].

Mycetomas caused by fungi are usually resistant to chemotherapy [1895], although anecdotal reports of response to long-term therapy with ketoconazole has been appeared [1413, 2403]. Surgical debridement may be necessary, and amputation is sometimes the final step.

The ulcer or sinus tract opening is surrounded by raised or flat margins. The abscess is filled with pyogenic materials and granules which are often covered by exudate. The wall of the abscess has granulomatous inflammation, chronic inflammation, and granulation tissue. Granules are present in the tissue.

Pus, exudate, or tissue should be macroscopically examined for sclerotia. Sclerotia are mounted in sterile saline and then crushed. Actinomycete granules are composed of filaments 0.5-1.0  µm in diameter as well as coccoid and bacillary elements. Fungal hyphae are 2-5 µm  in diameter with many intercalary swollen cells.

Specimens containing fungi are inoculated onto Inhibitory Mould agar or BHI agar with 10{64e6c1a1710838655cc965f0e1ea13052e867597ac43370498029d1bc5831201} sheep blood and incubated at 30°C. The sclerotia should be washed in sterile water or in an antibiotic solution prior to inoculation. Some fungi are sensitive to cycloheximide, thus IMA, SDA and a medium containing cycloheximide should be used together.