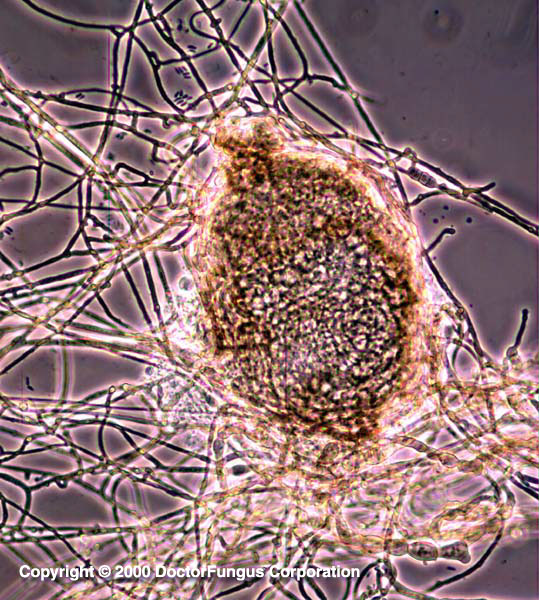 Phoma is a dematiaceous filamentous fungus that inhabits the soil and plant material. Phoma species are cosmopolitan in nature and are common plant pathogens. While they are commonly considered as contaminants, Phoma species may rarely cause infections in humans.

The genus Phoma contains several species. Most of the strains isolated from human infections have not been identified to species level. Color of the colony, morphology of the conidia, existence and structure of chlamydospores help in differentiation of the species from eachother [531]. See the list of active names, obsolete names, synonyms, and telemorphs for Phoma spp.

Phoma species are among the rarely encountered causes of phaeohyphomycosis [700]. The infection commonly develops after a trauma and immunosuppression is a major risk factor for its development. These infections may be cutaneous [160], subcutaneous [131, 383, 875, 2475], corneal [1856], or (rarely) systemic [1580].

Colonies of Phoma grow rapidly. They are flat, spreading, powdery to velvety, and often largely submerged in the medium. From the front, the color is initially white and later becomes olive grey with an occasional tint of pink. From the reverse, it is dark brown to black. Some species (particularly, Phoma cruris-hominis and Phoma herbarum) produce a reddish-purple to yellowish-brown diffusable pigment which is readily visible from the reverse [531, 1295, 2144, 2202].

Septate hyphae, pycnidia, conidia, and chlamydospores (for some species only) are visualized. The hyphae are hyaline to brown. Pycnidia are the large, round to pyriform, asexual fruiting bodies which are 70-100 µm in diameter. They are dark in color and bear phialides at their inner lining. Pycnidia have one to several openings (ostioles) on their surface from which the conidia are released outside. Conidia are unicellular, hyaline, and oval-shaped. Each conidium typically has two oil droplets inside. Some Phoma species produce brown chlamydospores that are arranged singly or in chains. These chlamydospores may be unicellular or multicellular and “alternarioid” (resembling Alternaria) in appearence [531, 1295, 2144, 2202].

Phaeoid (brown) hyphae may be observed. See our histopathology page.

The conidiogenous cells of Phoma are discrete and line the pycnidial cavity. Those of Pleurophoma, on the other hand, are part of the multicellular filaments [531]. Pleurophomopsis differs from Phoma by its thick-walled, multiloculate conidiomata and by producing alpha (short, ellipsoidal) and beta (long, filamentous) conidia [2204]. Phoma differs from Pyrenochaeta by the absence of setae (rigid hair located on the pycnidia).