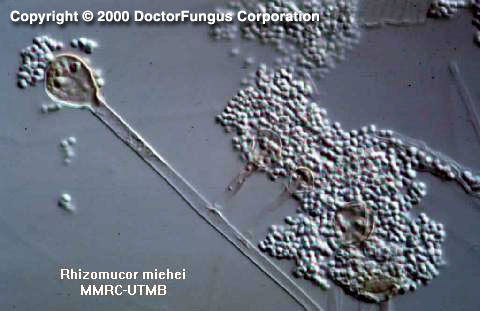 Rhizomucor is a cosmopolitan filamentous fungus found in soil and decaying fruit and vegetables. While Rhizomucor spp. are often isolated from fermenting and composting organic matter, they are also rare causes of serious (and often fatal) infections in humans. Rhizomucor spp. other than Rhizomucor variabilis are thermophilic in nature and can grow at temperatures as high as ~54 °C [531, 1295, 2144, 2202].

Rhizomucor spp. are among the fungi causing the group of infections referred to as zygomycosis. Although the term mucormycosis has often been used for this syndrome, zygomycosis is now the preferred term for this angio-invasive disease. Vascular invasion that causes necrosis of the infected tissue, and perineural invasion are the most frustrating features of these infections. Zygomycosis is often fatal [696, 1918].

Colonies of Rhizomucor grow very rapidly, fill the Petri dish, and mature in 4 days. The texture is typically cotton-candy like. From the front, the color of the colony is white initially and turns grey to yellowish brown in time. The reverse is white to pale. Significantly, Rhizomucor spp. other than Rhizomucor variabilis are thermophilic and yield good grow at temperatures as high as ~54 °C [531, 1295, 2144, 2202].

The microscopic morphology of Rhizomucor appears to be intermediate between that of Rhizopus and Mucor. Nonseptate or sparsely septate broad hyphae, rudimentary rhizoids, sporangiophores, sporangia, and sporangiospores are visualized. Rudimentary rhizoids, if exist, are few in number and are located on stolons between the sporangiophores. Sporangiophores are irregularly branched and end in sporangia at their apices. Sporangia (40-80 µm in diameter) are brown in color and round in shape. Apophysis is absent. Columellae, on the other hand, are prominent and spherical to pyriform in shape. Sporangiospores (3-4 µm in diameter) are small, unicellular, and round to ellipsoidal in shape. Zygospores, if present, are formed in the aerial hyphae. They are round to slightly compressed and dark brown to blackish brown in color [531, 1295, 2144].

Broad, thin-walled, hyaline, often aseptate or sparsely septate hyphae are observed in the infected tissues. The contours of the hyphae are typically non-parallel and branches are irregular. Invasion of blood vessels is noteworthy [462, 763]. See also our histopathology page.

Rhizomucor spp. must be differentiated from the other genera included in the phylum Zygomycota:

Rhizomucor differs from Mucor by growing at 50-55°C and by having rhizoids and stolons; from Rhizopus by having branched sporangiophores and rhizoids not arising opposite the sporangiophores; and from Absidia by having globose sporangia and sporangiophores that are not swollen where they merge with the columellae.
The features that help in differentiation of these genera are summarized in the table below [531, 1295, 2144, 2202].

No in vitro susceptibility data are available for Rhizomucor spp.

Similar to zygomycosis due to other fungi of class zygomycetes, treatment of Rhizomucor infections consists of antifungal and surgical therapy. Amphotericin B is the most commonly used antifungal agent. Liposomal amphotericin B has also been succesfully used in some cases with zygomycosis due to Rhizomucor [251]. Early diagnosis and treatment are crucial and mortality rate is high [1918].