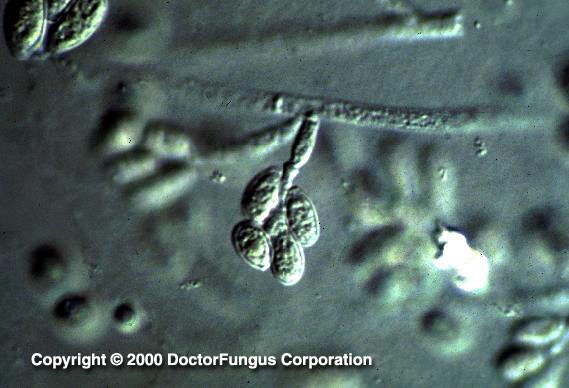 (described by Saccardo ex Castellani and Chalmers in 1919)

Scedosporium is a filamentous fungus which occasionally causes infections in humans.

See the list of obsolete names, synonyms, and telemorphs for Scedosporium spp.

See our page on Pseudallescheria boydii for detailed information about Scedosporium apiospermum and its telemorph.

Scedosporium prolificans can infect both immunocompetent and immunocompromised hosts. Subcutaneous infections, osteomyelitis, and arthritis are usually posttraumatic and may affect otherwise healthy individuals. Disseminated infections, on the other hand, are mostly encountered in patients who are immunosuppressed (particularly, neutropenic) due to various reasons and are often fatal [228, 908, 1090, 1405, 1826]. Scedosporium prolificans is now recognized as the most common cause of disseminated phaeohyphomycosis
[1902]. Cases with pneumonia [228], meningoencephalitis [228], and endocarditis [527] have been reported. Ocular infections (keratouveitis) [133] and colonization [1090] by Scedosporium prolificans have also been reported.

Colonies of Scedosporium prolificans grow rapidly at 25°C and mature within 5 days. The texture is cottony and moist (yeast-like) initially which later becomes flat with fine, short, mycelial tufts. From the front, the color is light gray to black and becomes dark gray to black as the colony matures. The reverse is gray to black [1295, 2202].

Septate hyaline hyphae, conidiogenous cells (annelides), and conidia are visualized. Annelides (conidiogenous cells) may arise directly from hyphae or are formed at the tips of the conidiophores. These annelides are flask-shaped and have a swollen base part and an elongated neck. Conidia (2-5 x 3-13 µm) are unicellular, oval-shaped, olive to brown, and have a slightly narrowed, truncated base. They are formed in clusters at the apices of the annelides. In addition, some isolates may produce round, thick-walled conidia which arise directly from the hyphae [1295, 2202].

(Mats of) septate hyphae may be observed in the infected tissues [2061, 2148]. Scedosporium prolificans cannot be differentiated from Scedosporium apiospermum in tissue sections.

While itraconazole or terbinafine alone has no activity against most Scedosporium prolificans isolates, the combination of these two drugs proved to be synergistic in vitro against 95{64e6c1a1710838655cc965f0e1ea13052e867597ac43370498029d1bc5831201} of the isolates after 48 h of incubation. In addition and importantly, antagonism was not observed in this combination study [1512].

Due to its primary multi-resistant nature, treatment of Scedosporium prolificans infections is difficult. Amphotericin B therapy alone or in combination with flucytosine, fluconazole, or itraconazole have so far been used in cases infected with Scedosporium prolificans. However, mortality rate has been very high in most of the cases with disseminated infection [228]. Liposomal amphotericin B combined with G-CSF appeared to improve survival in an immunocompromised murine model with disseminated Scedosporium prolificans infection [1697]. Posttraumatic infections, such as arthritis in immunocompetent cases have responded to fluconazole or surgical debridement alone [1793].

Conclusively, optimal treatment of Scedosporium prolificans infections remains yet unknown and there is a great demand for novel agents with favorable activity. Importantly, the clinical outcome is closely associated with the immune status of the host, extent of the infection, and feasibility of concomitant surgical debridement.