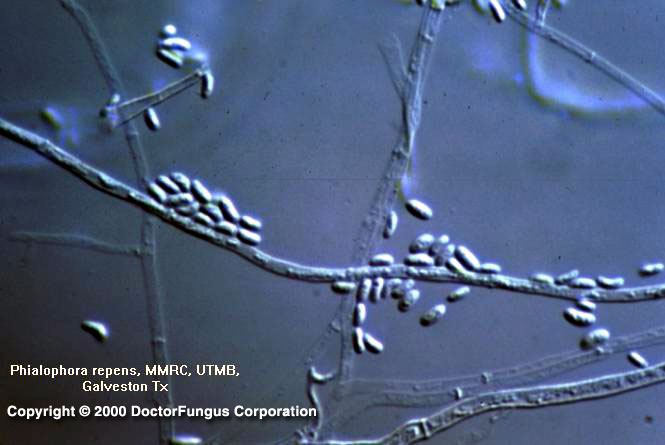 Phialophora richardsiae, phialides with saucer, flaring collarette that produces round to slightly oval conidia and on occasion some isolates will produce a second type of phialide which is similar to those of P. repens and its conidia. Phialophora verrucosa, some isolates have a yeast like synanamorph which will produce a phialide within the yeast cell.

Phialophora parasitica, tapering, dark at the base phialides with parallel collarettes. Phialophora is a dematiaceous filamentous fungus that inhabits the soil, plants [2194], and decaying food. It is widely distributed in nature. Phialophora species are the causative agents of some human infections.

See the list of obsolete names, synonyms, and telemorphs for Phialophora spp.

Phialophora species are among the causes of chromoblastomycosis and phaeohyphomycosis. Phialophora verrucosa is the principal causative agent of chromoblastomycosis in tropical and subtropical areas, particularly at Japan and South America. The clinical forms of phaeohyphomycosis may be diverse, including cutaneous infections, subcutaneous cysts, keratitis, endocarditis, arthritis, osteomyelitis, cerebral infection, fatal hemorrhage, and disseminated infection [602, 1388, 2053]. Phialophora europaea has been isolated from cutaneous and nail infections in North-western Europe [532].

Colonies of Phialophora grow moderately slowly and attain a diameter of 2-3 cm following an incubation of 7 days at 25°C. The texture is wooly to velvety and may be heaped and granular in some strains. From the front, the color is initially white and later becomes dark grey-green, brown or black. From the reverse, it is iron grey to black [1295, 2144, 2202].

Septate hyphae, phialides, and conidia are observed. The hyphae (up to 5 µm wide) are branched, and hyaline to brown. Phialophora parasitica typically produces hyphae with verrucose walls.

Similar to the other fungi causing chromoblastomycosis, spherical or polyhedral, dark brown, thick-walled sclerotic bodies (muriform cells) are visualized in tissues infected with Phialophora species. Absence of muriform cells has been reported in cases who are immunosuppressed or debilitated [2053]. Phaeoid hyphae may also be observed.

1′ Phialides without saucer-shaped or flared collarettes. (2)

2′ Collarettes not vase shaped, but with parallel walls. (3)

For MICs of various antifungal drugs for Phialophora, see our N/A(L):susceptibility database.